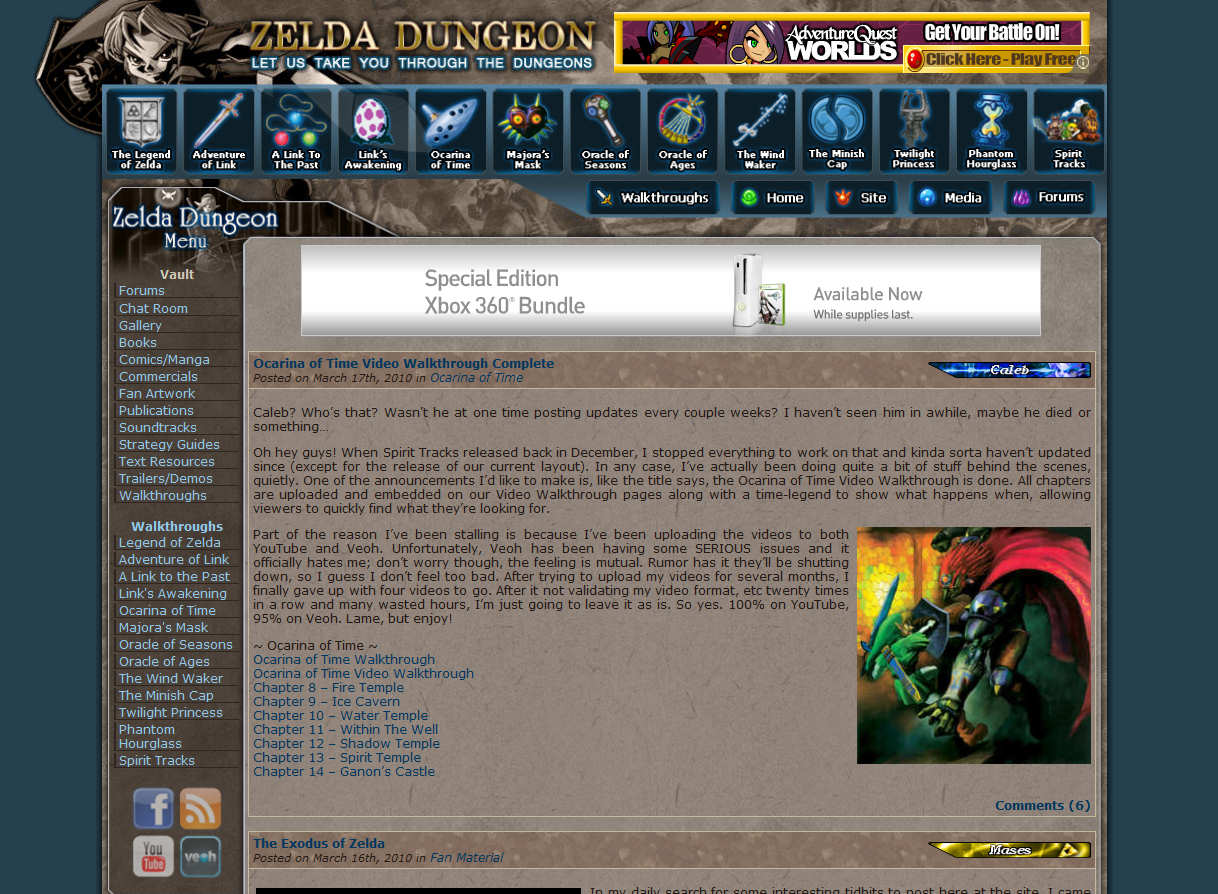 Layout 18 launched on November 29th, 2009, which was a day the site got 8,238 unique viewers, another new record. The new layout saw a return to a horizontal game navigation menu across the top of the site. Gone were the huge pop-ups and instead, users had to click the game icons at the top, first taking them to the game index pages. This made users go to an extra page, but it solved many users concerns about the bulky game navigation pop-outs from the previous two layouts.

The new layout saw another drastic change in the display of content. This marked the first time an index page had just one navigation bar, allowing for wider images and videos to be displayed right on the index page. Furthermore, the single navigation bar was found on news, media, vault, and general game content pages. On walkthroughs pages, there was no navigation bar at all, allowing the content area the span the entire width of the layout. This extra room really gave even more freedom in terms of what could be done with walkthroughs, with the inclusion of official artwork, larger screenshots, and much more information.

The launching of the layout also saw a shift from Cutenews to Wordpress. This was a huge upgrade as it allowed the website to implement a number of wordpress plugins as well as in on-site comments system. Prior to the shift to Wordpress, all news posts were made at the site and forums, but users could only comment at the forums. With Wordpress and the IntenseDebate plugin, users could comment right on the news post without being forced to go to the forums or to register a username. This allowed for much better interaction between the staff and the viewer base.

Just weeks after the launch of the new layout, Spirit Tracks hit stores and on day one there was tons of game content, including the first few chapters of the Spirit Tracks Walkthrough. Just days after the games release, a full textual walkthrough was complete. Given the fact that the guide was online so quickly, and the high search engine rankings that it garnered, the site hit record breaking numbers once again. The site hit 25,318 unique visitors on December 13th, more than triple what was a record just two weeks earlier. Even that record would be short lived as on December 28th, 2009, the site recorded 44,301 unique visitors. Even after the holiday season and into the Spring months, visitors remained high, with the site never dropping below 13,000 unique visitors from then until present day.

While Spirit Tracks content was the focal point of this time period, the site also saw great expansion in other sectors of the website that were not game guide related. Site sections such as the Zelda Commercials, Zelda Trailers, Publications, Books, and many other pages were launched, to help bolster non-game guide related content.

On March 17th, 2010 the Ocarina of Time Video Walkthrough had been completed and posted at the site. Videos were constantly being updated at the Zelda Dungeon YouTube channel, where by the time of completion, the channel reached over 5000 subscribers. Immediately following the conclusion of the Ocarina of Time Video Walkthrough, video guides were completed for Link's Awakening and The Adventure of Link, giving the YouTube audience constant videos.

Several new staff members joined the team during this time period including Gooey, who was brought on board to be the Facebook Coordinator. Daily Facebook updates began immediately, including raising questions to fans, posting fan artwork, fan videos, as well as posting all the Zelda Dungeon news, and making fun Zelda statements. This quickly allowed the Facebook page to blossom, where by May 13th, 2010, the Facebook page hit over 2,000 likes.

Another new addition to the team was Axle the Beast. Axle would go on to launch the Curiosity Shop, the Zelda Dungeon weekly video Mailbag. This was a video question and answer segment where fans could send in questions for Axle to answer. It gained quite the popularity both at the website and at the Zelda Dungeon YouTube channel where it remained active for several years to come, with over 140 episodes having been recorded.

Justin was another notable staff member who was added to the team to help with much of the behind the scenes work at the website. This included the back-end coding, Wordpress plug-ins, Forum modifications, and even layout planning.