From Zelda Dungeon Wiki
Jump to navigation Jump to search
Want an adless experience? Log in or Create an account.
Layout 13.0 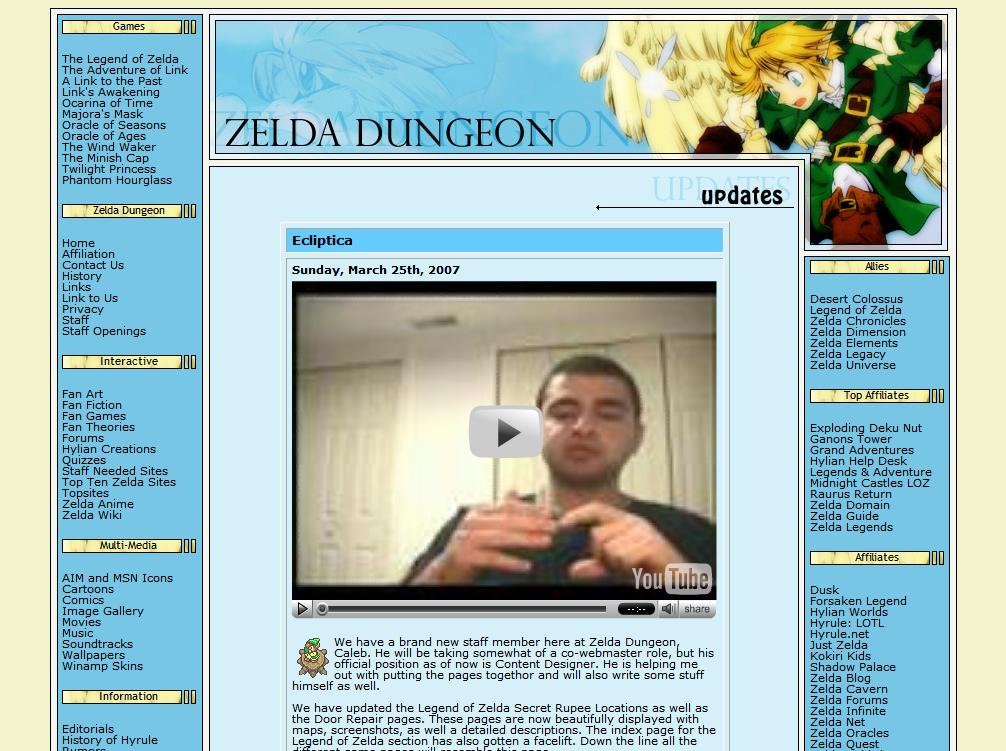 Layout 13.0 was the second layout that was created by Jessica and it took on a much brighter color scheme than the previous dull layout. The layout was focused on simplicity, with two standard navigation bars, very limited amounts of imagery, and a large content area.

The new layout marked the continued emphasis on video content material at the website. During this period, regular daily text based updates had gone away, having been replaced by weekly, much larger video updates. These videos were embedded onto the site's home page, and a subsequent textual update was placed right below. These would be wrap up videos of all the changes made during the previous week, as well as updates on any ongoing projects.

Another feature that has since grown at the website, was the inclusion of video based walkthroughs. Mases began working on a video guide for The Legend of Zelda. The videos were published on YouTube and embedded on Zelda Dungeon. The first video of the Legend of Zelda walkthrough is now the oldest surviving video on the sites YouTybe channel, garnering over 1.8 million views as of early 2019. The current YouTube account used for Zelda Dungeon was created on February 22nd, and quickly began to gather a following of subscribers based on promotion from the website.

On March 25th, 2007, Caleb Simpson was formally announced as a new staff member at Zelda Dungeon. Caleb actually applied to the website months before he was hired, but because of the uncertainty with the site during these months, he wasn't officially hired until March. Caleb began working at the website as a content specialist, working with Mases on some of the older game content, with more of an emphasis on better display and completeness of the material. Mases and Caleb revamped much of the original Legend of Zelda section of the site during the time period of this layout.