From Zelda Dungeon Wiki
Jump to navigation Jump to search
Want an adless experience? Log in or Create an account.
Layout 1.0 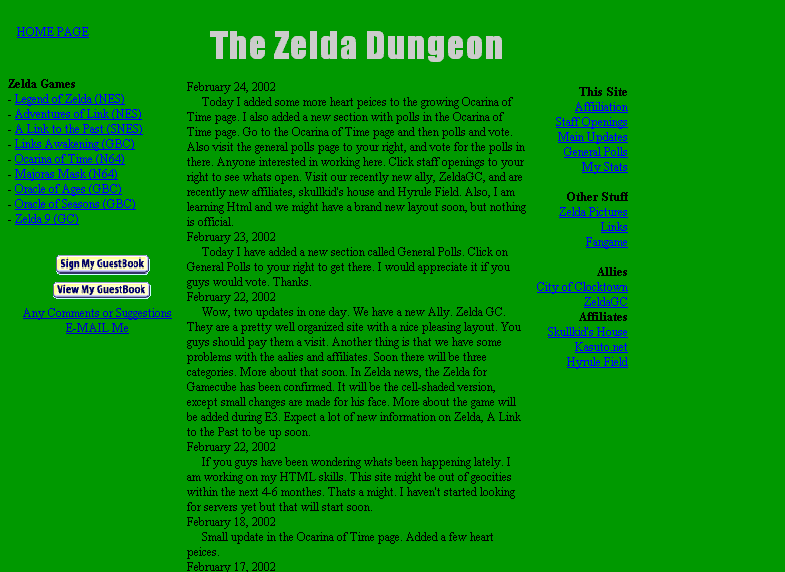 The site launched on August 19th, 2001 and was originally hosted at Yahoo Geocities, a free hosting service. The site initially launched as part of a network of sites about several other gaming and TV show series' that Mases had remote interest in, including Mega Man and Beavis and Butthead. The network also included short-lived websites dedicated to both Final Fantasy and Dragon Ball.

The first layout was built using the Yahoo Geocities Site Builder and was incredibly basic and very primitive looking. Each subsequent page of the website had a different visual layout. Early inspiration for the website and layout came from Zelda sites such as Zelda Power, as well as other websites including Zelda Gaming Online and Ganon's Tower. The front page had a standard two-sidebar layout with links to the various pages at the site. Subsequent pages of the sites each had their own unique layout that was not consistent from page to page. This was quite standard at the time.

This early era didn't last long, and by October of 2001 all of the other sites on the network had gone inactive and only Zelda Dungeon remained. This primitive version of Zelda Dungeon had very little game content, consisting mostly of Zelda pictures and in-game artwork.

In October of 2001, Mases first began working on an Ocarina of Time Walkthrough. After about a month of work, Mases was beginning to lose interest in working on the site, based on the fact that there were no incoming visitors. Activity came to a complete halt in December of 2001. It wasn't until January 2nd, 2002, when Zelda Dungeon was first listed on the Google Search engine. For the first time, consistent visitors began to flow into Zelda Dungeon. While it was such a small number in retrospect, the site was receiving 5-10 hits per day, and this caused work to resume on Zelda Dungeon. The site got its first affiliate in City of Clocktown, an aspiring website at the time, and Mases became very close friends with the Webmaster of City of Clocktown.

Zelda Dungeon continued to rack up more affiliates and there was a consistent flow of new content appearing at the site, which cause viewership to increase. With the help of the Webmaster of City of Clocktown, Mases setup an account at shorturl, and the site could now be found at the much easier to remember zeldadungeon.vze.com.

Controversy hit Zelda Dungeon during this early period when Zelda Dungeon was directly linking to mp3 audio files that were hosted by Zelda Power. It wasn't until Aaron Holt, Webmaster of Zelda Power, contacted the website asked to remove the direct links to Zelda Power's media.