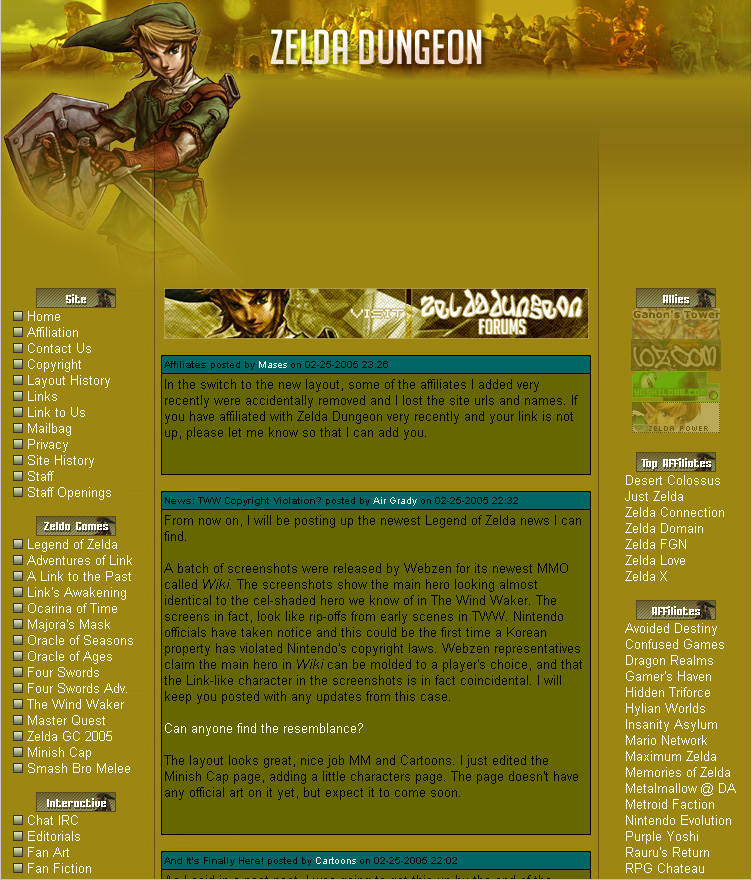 Zelda Dungeon launched layout 8.0 on February 25th, 2005. The layout was MetalMallow's second attempt at a layout, and it took upon a gold color scheme. The layout had dropped the quick links navigation system at the top of the site that was present in the previous two layouts, with game links now appearing once again within the sidebar.

This era of the website saw some major changes in the day to day activities and updates at the website. In the previous four layouts, Mases and Cartoons were the primary news posters at the website, with the occasional post by MetalMallow. However, during the months after the release of layout 8.0, Zelda Dungeon hired several new staff team members to keep the website up to date with both Zelda news, as well as other media based content. Updates had reached their peak during this layout, with nearly daily updates occurring for several months.

In January of 2005, The Minish Cap was released for the Game Boy Advance in the United States, and just a few months later, Mases began working on a Minish Cap Walkthrough. Work on the walkthrough continued throughout the summer, fall and winter until its eventual completion in January of 2006. With the updates on the Minish Cap Walkthrough and content sections, as well as the frequent updates by the staff members of the website, visitors began soaring to new heights. The website repeatedly was breaking new records in total visitors for a single day. On April 2nd of 2005, Zelda Dungeon received 3159 unique visitors, which was a single day record at the time, and a record that would stand for the next 29 months.

The Zelda Dungeon Forums also continued to slowly grow during this point in time, eclipsing the 200 member mark and the 5000 posts count.