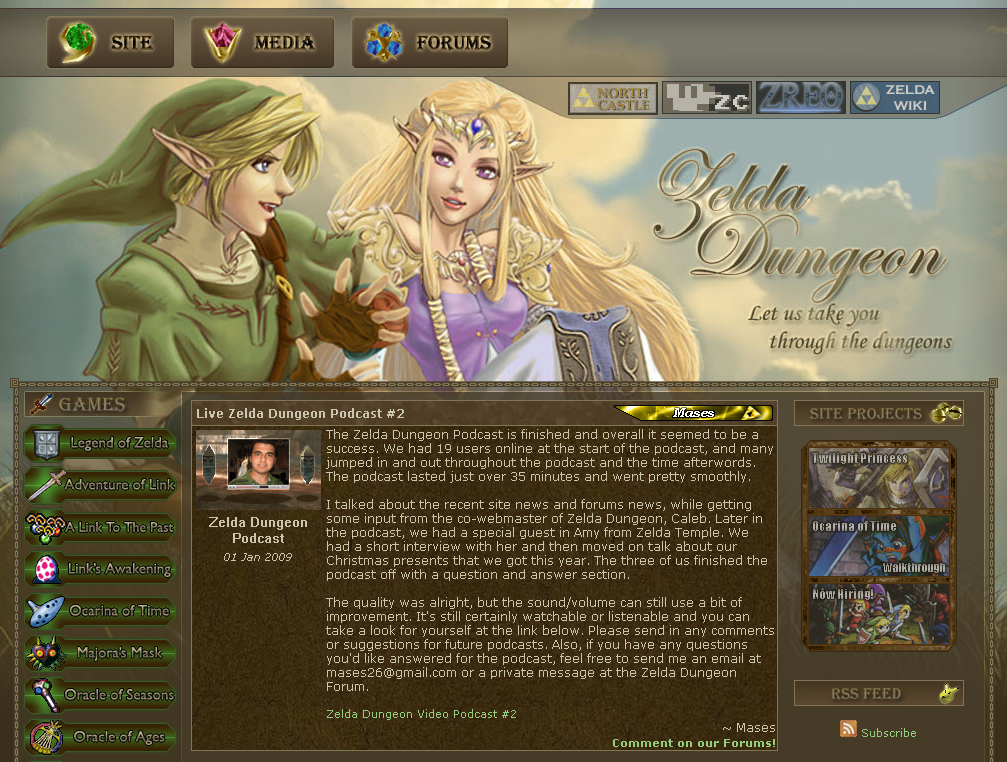 Layout 17.0 was created by Caleb and released on October 21st, 2008. The layout was structurally very similar to layout 16.0, but had a much different color scheme, and included a a large piece of fan artwork, used for the the banner.

In November of 2008, Mases began experimenting with hardware that would allow for a Live Zelda Dungeon Video podcast. The first podcast took place on November 29th, 2008, but since it was not recorded, it is viewed as a beta version of the podcast. The first official podcast took place on December 9th, 2008. The podcast was streamed live onto the Zelda Dungeon Forums and appeared side by side with the forum shoutbox. Forum users could actively communicate with Mases and other guests on the shoutbox while the podcast was taking place. The podcast ran through the latest news at Zelda Dungeon, at the forums, and within the Zelda world. The podcast then had a Question and Answer section. Each subsequent podcast after the initial one included a special guest, usually a webmaster of another gaming website. Mases interviewed the guest live on the podcast, asking questions about their website or their interest in the Zelda world. The guest would remain online for discussion during the question and answer section. Future podcasts added new features such as a featured thread discussion. All podcasts were recorded live and put on Google Video unedited for viewing of people who couldn't make the live show.

After the conclusion of the podcast, Mases remained online for several hours talking with the members of Zelda Dungeon. Often times, other members of the staff or the forums were welcomed onto the live stream to take part in discussions. Mases often times acted as a DJ playing various music throughout the after party. Several activities took place in the after-hours of the podcast including Name That Zelda Tune, Zelda Hangman, as well as live gameplay of various Zelda and other gaming titles. After several weekly podcasts, the stream changed to being bi-weekly, and was eventually phased out due to time restraints by Mases and complications with uploading of the podcasts due to the closure of Google Video.

In the Fall of 2009, there was a dramatic shift in how the website was updated. The Zelda Dungeon Alliance, which was introduced in 2008 was beginning to be phased out as many of the websites involved were no longer as active in the production of new content. There was gradual process moving away from just guide-exclusive content that dominated the previous year and a half. The website started making frequent news posts in the fall and especially in the lead up to the release of Spirit Tracks. The hype of the new DS game, along with the constant coverage in news updates, led the site to reach new heights in terms of daily viewership.

At this point in time, this was the layout that was online for the longest period of time in site history, spanning over 13 months.