From Zelda Dungeon Wiki
Jump to navigation Jump to search
Want an adless experience? Log in or Create an account.
Kalle Demos 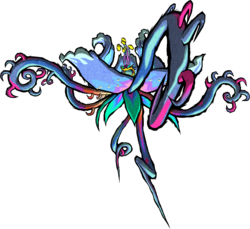 Kalle Demos is the Boss of the Forbidden Woods, the second dungeon in The Wind Waker. It appears as an enlarged Deku Baba-like being that lives in a bulb and attaches itself to the ceiling. After Makar fell into the Forbidden Woods, Kalle Demos swallowed him once he got too close. The beginning of the battle with Kalle Demos is vaguely similar to Barinade from Ocarina of Time, as Link uses the Boomerang to cut the strands holding it up to the ceiling.

Makar before being eaten by Kalle Demos

Immediately before the battle begins, Kalle Demos will attach itself to the ceiling by using its vines. Link can use the Boomerang to target them and cut them loose. Link will also need to avoid the vines themselves, which will often pop out of the ground next to Link and attempt to attack him. Link can simply run away from these; they will only follow him around the room for a short period of time. The vines do have a secondary attack; if they glow, then they are about to whip to the ground trying to hit Link.

Once all of the vines have been cut down, then it is time to charge in and attack the center of Kalle Demos. Attack the center head a few times, then quickly retreat back outside the boss. If Link stays there too long, the petals will fold in and cause him some heavy damage. This process needs to be repeated until Kalle Demos has been defeated, which causes it to wither and die. Makar will be freed and a Heart Container will be left where Kalle Demos once resided.