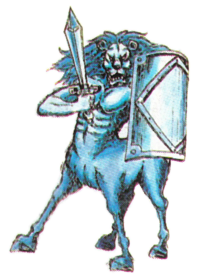 Lynels are centaur-like beasts that have the body of a horse, the torso of a human, and the head of a lion. They are common enemies within The Legend of Zelda series, having appeared in five games to date.

Lynels make their debut in The Legend of Zelda. They continuously send out sword beam projectiles toward Link. They are found across the northwestern section of the Overworld. They come in two color variations; red and blue. The blue Lynels have twice as much health and deal twice as much damage than the red Lynels.

Lynels appear exclusively atop Death Mountain while in the Dark World. Since they are on the path located between Turtle Rock and Ganon's Tower, these enemies are not encountered until very late in the quest.

Lynels in A Link to the Past have similar traits to their The Legend of Zelda counterparts. They once again shoot out projectiles toward Link, but this time in the form of fireballs instead of swords. Fortunately, these fireballs are not too damaging, doing only one heart of damage to Link when he has the Blue Mail on. Link's Fire Shield is not quite enough to deflect these fire attacks, but Link's Mirror Shield will do the trick. Simply coming into contact with a Lynel is more damaging, doing two full hearts of damage to Link when he wears the Blue Mail.

Link can defeat a Lynel in a variety of methods. His standard Master Sword will have no effect on these fearsome beasts. If Link has acquired either the Tempered Sword or the Golden Sword, then his sword can do damage. Alternatively, Link can hit a Lynel with his Master Sword, but only by performing a Spin Attack.

Link can also defeat a Lynel with three hits from his Magic Hammer, but this requires him to get very close. The other alternative is to shoot a single Silver Arrow to defeat one of these creatures.

These are easily the most challenging enemies in the game. Referred to as Fire Cats in the booklet, these wolves charge up at Link and deal some massive damage, and once they start pounding him it's hard to get them off. Defend with the shield and run up for some quick slices to finish them off. Beware, as only the Mirror Shield (Lv. 3) can block their spears. They have a rather good sense of aim with their spears as well, so watch out.

Lynel in Oracle of Ages are identical to their Oracle of Seasons counterparts. They are found exclusively within the Sea of No Return, located just outside the entrance to the Ancient Tomb.

The Lynel returns from a long absence in the sequel to A Link to the Past, A Link Between Worlds. They can be found on Death Mountain, in both Hyrule and Lorule. They are easily the most dangerous enemy, as they deal four whole hearts of damage per hit. The best way to defeat them is to use the Ice Rod to stun them, then go over and slash away with the Captain's Sword or Master Sword. 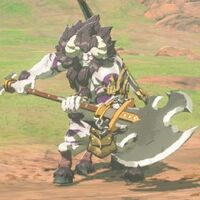 "These fearsome monsters have lived in Hyrule since ancient times. They possess intense intelligence, resilience, and strength, making them amongst the most dangerous monsters in all the land. This is compounded by the fact that they have a natural resistance to all elements. You would be wise to challenge a Lynel only if you're very well prepared."

Lynels appear in Breath of the Wild as some of the strongest enemies in the game. There are many different types, each progressively getting stronger ranging from the standard Red-Maned Lynel to the deadly Silver Lynel. A good strategy is to stay close to them, as the Shock Arrows, Fire Arrows, or Ice Arrows the Lynel shoot are hard to dodge and do massive damage. Execute perfect dodges, and unleash flurry attacks on the Lynel to eventually defeat them. Alternatively, if you have the time you can either shoot its face or dodge its charge attack and mount it to get some hits in that do not degrade your weapon at all. Additionally, you can use Urbosa's Fury to stun the Lynel and enable you to mount it.

The drops include some of the best items in the game, including the Savage Lynel Bow, the Sword the Shield, among others. These drops also have mighty and normal versions, both of which are weaker than the savage weapons, with mighty weapons being stronger than the normal Lynel weapons. They can also drop a Lynel Hoof, a Lynel Horn and Lynel Guts. These are used for enhancing many pieces of armor in the game, such as the Barbarian Armor.

The Legend of Zelda Comic