From Zelda Dungeon Wiki
Jump to navigation Jump to search
Want an adless experience? Log in or Create an account.
Nali 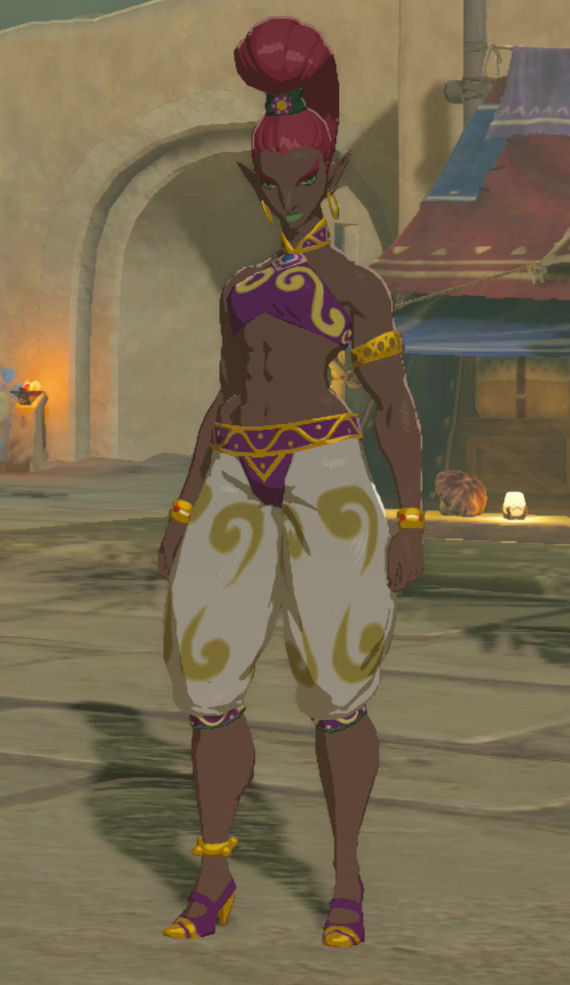 Nali is a character from Breath of the Wild.

Nali is a Gerudo who lives on the west side of town with her roommate Pritana. Each morning she wakes up at 8am and makes her way to the main part of town. She comments to Link that it is very unusual for anybody to have visitors, thanks to all the trouble that Divine Beast Vah Naboris is causing. She thinks that Link is quite brave for making the tripe out to the town.[1]

During the afternoon and into the early evening, Nali will chat with her friend Pritana about how Riju's Thunder Helm was stolen. Nali mentions that the helmet was once Lady Urbosa's and it has been passed down from chief to chief for generations.[2][3][4] They believe that the Yiga Clan, a group of professional assassins, stole the heirloom.[5] This is why the Barracks has been a bit noisier than usual.[6]

After 7pm, Nali will do some shopping, as she is looking for some Mighty Bananas.[7] They bananas are loaded with protein and calories, which will give added power when eaten. She mentions that there is a tribe that exclusively eats mighty bananas. This is in reference to the Yiga Clan.[8] While not as often available in Gerudo Town, she suggests checking out Kara Kara Bazaar, as they always have a ton of them for sale.[9]

After midnight, Nali will head home to go to bed. She tells Link that if he were to go outside wearing that outfit, he'd freeze. Since it's late, it's time for bed and she'd offer Link to stay at her house, but there is no room. She suggests that Link visit Romah's Hotel, as there may be some open rooms available for the night.[10]