Difference between revisions of "Hook Beetle" 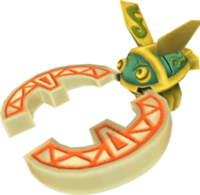 The Quick Beetle can be upgraded even further into the Tough Beetle. Gondo requires three Ancient Flowers, four Amber Relics, one Blue Bird Feather, and one Goddess Plume to perform this upgrade. Also, it costs 50 Rupees. The Tough Beetle can stay in the air longer, making long trips much easier to perform.