Armos Knight (A Link to the Past) 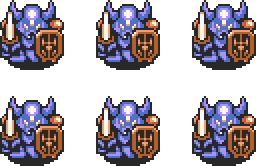 "Armos Knights
Link discovers the Armos Knights in the last room of the Eastern Palace. Luckily, the wooden Arrows which he carries will pierce their armor. If he runs out of Arrows, the Sword is the only weapon he'll have to rely on. The last Knight will be more difficult to beat than the first five. Anticipate where the last Armos Knight will land and launch an Arrow in that direction. The Pendant of Courage will be Link's reward for overcoming the Armos Knights."

""Oh, no! Armos Knights!" Equip Link with his Bow and Arrows. Three carefully placed shots will take care of each of the first five Knights."

"The last Knight will not like the fact that you have defeated his cohorts. He's extremely angry. It will take more than three hits to fend off his attack."

A Link to the Past Bosses[edit][hide][show]
Retrieved from "https://www.zeldadungeon.net/wiki/index.php?title=Armos_Knight_(A_Link_to_the_Past)&oldid=242493"
Category: