Moldorm (A Link to the Past)

From Zelda Dungeon Wiki
Jump to navigation Jump to search
Want an adless experience? Log in or Create an account.
Moldorm 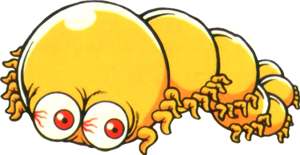 "Moldorm
A slithering, segmented worm-like creature, Moldorm guards the coveted Pendant of Wisdom. Moldorm resides on the sixth floor of the Tower-a hovering platform with opening edges. If Link drops down to the fifth floor, he may lose some Heart power, but he can charge back up the staircase again. The tail is the weak spot and Link soon discovers that several precise blows to the end of the tail will take care of Moldorm."

"The giant, worm-like Moldorm was king of the Tower of Hera. The beast was ever eager to prove its mastery by hurling any who challenged it down from the precarious platform on the sixth floor."

Moldorm is the Boss of the Tower of Hera, the third Dungeon in A Link to the Past. Later, Moldorm appears in Ganon's Tower as one of the three Mini-Bosses.

The battle starts with Moldorm quickly moving around the room in random patterns. Moldorm's only weak point is its tail. If Link touches Moldorm's head, slashes its head etc. he will bounce back. In order to defeat Moldorm, Link must hit Moldorm's tail six times with his sword. However, if Link falls down any of the pits, he will have to climb back up and start the battle over again. This boss preys on Link's annoyance factor by trying to send him off the edge causing the battle to start over. The entrance spot at the bottom in the first encounter provides somewhat of a safe haven. The best strategy is to strike its tail when it is revealed and quickly avoid it, hitting only at the most opportune moment. After Moldorm has been hit four times, it moves much faster than usual, making it even more difficult to hit. Hitting it two more times finishes the job. Once Link defeats Moldorm, he is rewarded with a Heart Container and the Pendant of Wisdom.

A Link to the Past Bosses[edit][hide][show]
Retrieved from "https://www.zeldadungeon.net/wiki/index.php?title=Moldorm_(A_Link_to_the_Past)&oldid=260101"
Category: