From Zelda Dungeon Wiki
Jump to navigation Jump to search
Want an adless experience? Log in or Create an account.
Trial Gate 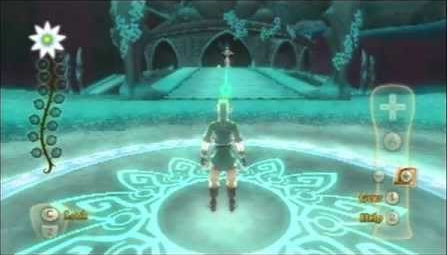 Trial Gates are portals to the trials in the Silent Realm in Skyward Sword.

There are a total of four Trial Gates in the game, numbering one in each region, including Skyloft. These gates can be found by looking for Blessed Butterflies that fly around the area or by dowsing for them after learning the correct ballad from the Isle of Songs. The gates are all located near significant landmarks in their respective areas: one near the Viewing Platform in Faron Woods, one near a stone bridge on Eldin Volcano, one right outside the Lanayru Mining Facility in Lanayru Desert, and the final one near the Light Tower in Skyloft's plaza.

Once the gate is found, Link can strum the Goddess's Harp to kickstart a duet with Fi, who provides vocals as he plays in tune with the pulsing circle. The song Farore's Courage opens the Faron Woods gate, Din's Power the Eldin Volcano gate, Nayru's Wisdom the Lanayru Desert gate, and the Song of the Hero the Skyloft gate. Once the song is played correctly, flower petal motifs will appear and surround the gate, at which point Link may stab the Goddess Sword into its center to transport his spirit into the Silent Realm. Each Trial Gate will remain active until Link succeeds in completing their respective trials, at which point they disappear and cannot be accessed again.