From Zelda Dungeon Wiki
Jump to navigation Jump to search
Want an adless experience? Log in or Create an account.
Slime Eyes 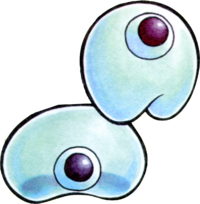 Slime Eyes,[1] also known as Slime Eye,[2] is a Nightmare found within Link's Awakening. It is the boss of the third dungeon, Key Cavern,[1] and guards the Sea Lily's Bell.

Upon first entering the room, the area appears to be empty,[3] but soon after, Slime Eyes says that Link won't be able to find him.[4] Zols start to fall from the ceiling and continue to come. Link can use the Pegasus Boots to dash into the walls of the room to knock down Slime Eyes, who is clinging onto the ceiling.[5][6] At first, it looks like one giant eye, but after Link slashes it enough times with his sword, it slowly starts to split into two separate eyes.[7]

Once they are connected only by a thread, he can rush into it with the Pegasus Boots, cutting off their connection.[8][9] Both eyes then attack Link separately, each one occasionally jumping up to the ceiling and falling back down with a crash that temporarily stuns Link. Once he hits each eyeball with his sword until both eyes are defeated, Link is rewarded with a Heart Container and is allowed passage into the next room containing the Sea Lily's Bell.