From Zelda Dungeon Wiki
Jump to navigation Jump to search
Want an adless experience? Log in or Create an account.
Molli 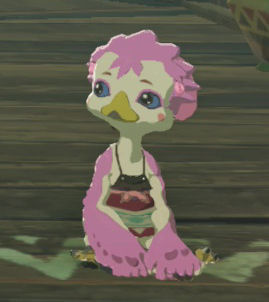 Molli is a character in Breath of the Wild.

Molli is a young Rito who resides at Rito Village. She lives near the top of Rito Village with her father, Harth. She is distinguished from the other fellow Rito children by her pink feathers. She wakes up each morning at 8am and heads over to the edge of one of the platforms, about two-thirds the way up Rito Village. If Link tries to talk to her while she is walking, she claims she is busy, but encourages Link to follow her to hear a story.[1] Molli remains here all day long, gazing out towards the Hebra Mountains. At 9pm each evening, she will head back up to her hut to go to bed.[2] While she is sleeping, Link can wake her up and talk to her, but she feels it's not quite yet the time to get out of bed.[3][4]

The Bird in the Mountains

Main article: The Bird in the Mountains

The first time Link speaks with Molli when she's sitting out on the edge of the platform, she will tell Link a story, which in turn will begin The Bird in the Mountains shrine quest.[5] Molli's grandfather would travel up to a big tree and would stare off to the northwest. There, he would see a huge snow-white birdie with its wings spread wide. He would then fly closer and would see that the bird had swallowed something.[6]

However, that's the only part of the story that Molli remembers as she would always fall asleep at that point.[7] Molli does remember that the tree Grandpa was referring to is high up on the Hebra Mountains and Molli points to the Talonto Peak.[8] She is left wondering what the bird had swallowed.[9]

After completing the quest, Link can return to Molli and speak with her. She thanks him for figuring out the truth about snow-white birdie.[10] This now allows Molli to tell the entire story by herself.[11][12] Mollie even adds a little bit to the end of the story, about how Link entered the shrine, defeats the bad guys, saved the princess, and they all lived happily ever after.[13]The last bit of the story by Molli didn't actually happen, but does foreshadow's Link's eventual path of saving Princess Zelda. This however, has nothing to do with the particular quest.