Wolf Link will awake just to see that he is locked in a prison cell with his leg chained to the ground. Struggle to escape for a bit and a cut-scene will take place. It is here we meet Midna, Link’s sidekick throughout the game while he is in wolf form. She seems rather excited to meet you and teases you a bit. She takes a step back, creates a small ball of power and breaks wolf Link’s chain with it.

You’ll be free to roam around the cell but there isn’t much to do. Break the small pile of wreckage in the corner of the cell and you’ll see a small gap under the prison bars. Stand next to the gate and press the ‘dig’ button on your d-pad. Wolf Link will dig underneath and appear on the other side of the cage.

Midna will jump on top of you and agree to help you escape, but you’ll have to do exactly as she says. It is rather comical seeing Wolf Link trying to take a bite out of Midna. Now with Midna on your back run on over to the cage that was next to yours and you’ll see a lever hanging from the ceiling. Z-target the lever and then click ‘A’ to jump and bite it. Wolf Link will hang on it and pull the lever down, opening the nearby cage. Dash through the small area and keep going until you reach the open sewers. 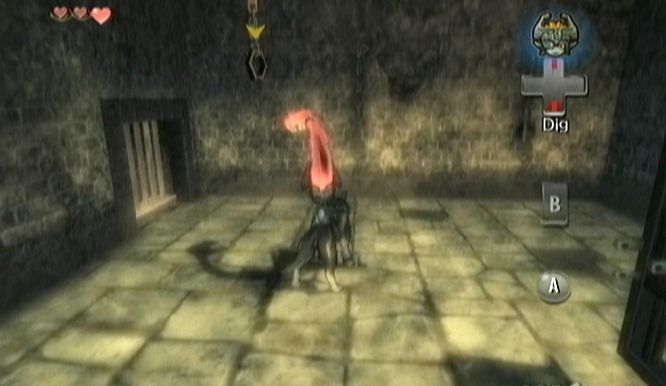 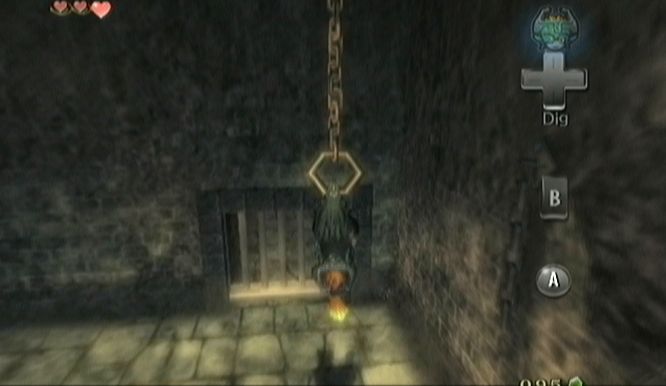 Once you reach the sewers, Midna will give you a lesson on how to sense things. Use the left or right d-pad buttons to use Wolf Link’s senses and you’ll see a scared soldier’s spirit standing nearby. He doesn’t have anything interesting to say but is just here for practicing using your senses. The sewers and the Twilight areas of the game are filled with these spirit beings. The sewers have a bunch of small secret areas. Head down the first corridor and if you take a right you’ll come to another lever that Link can bite down on. Do so and a cage will open that will lead to some rupees. 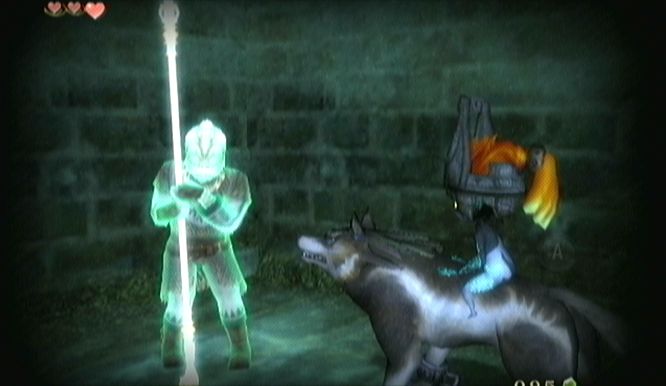 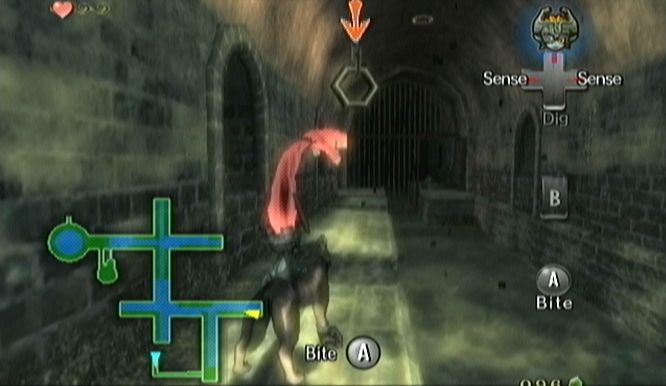 A new enemy known as a Shadow Vermin appears in this area. They wander the sewers and will attack randomly by throwing themselves towards Link. Just target and attack them for an easy kill. 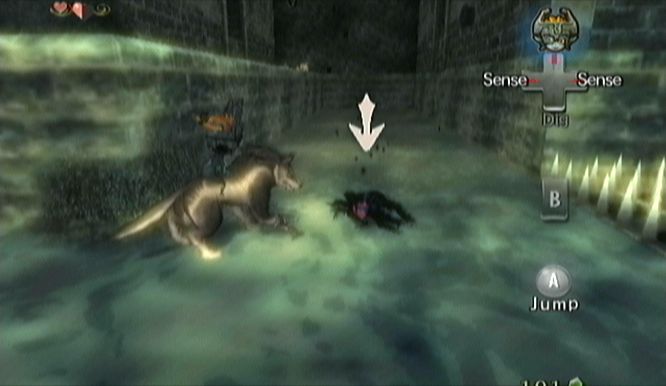 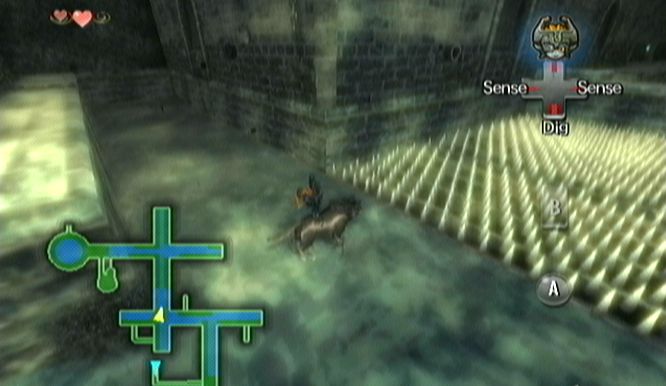 Take the other passage heading west in the sewers. There are a couple levers in the area that can be pulled down. In these small little areas use Wolf Link’s senses to sense treasure buried underneath. When using Wolf Link’s sense, they are easily marked with glowing symbols coming out of the ground. Just stand right above these glowing spots and dig out some of the prizes.

There are some spikes that prevent Link from traveling northward. Head to the south of the sewer and you’ll see another lever. Jump on the lever and it will open a gate that makes water flow freely. Now Wolf Link can swim northward above the spikes. 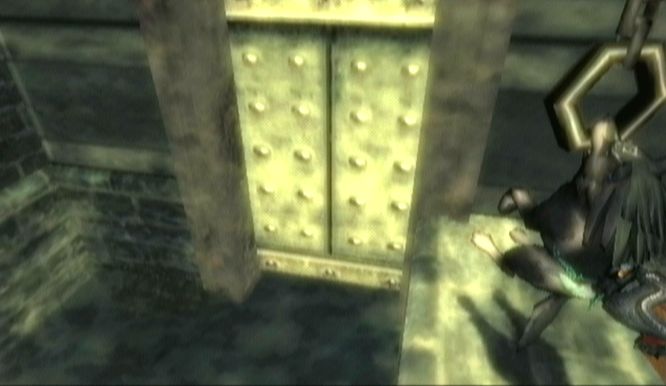 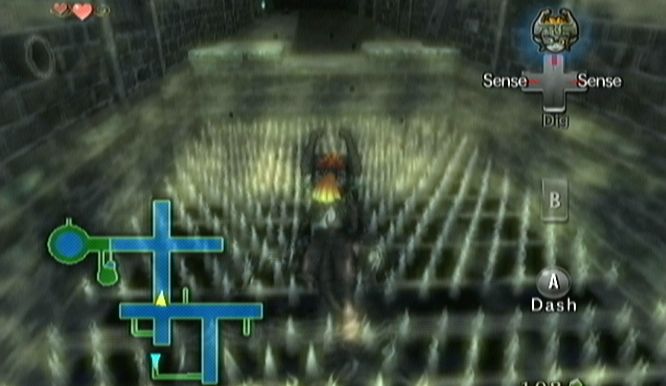 If you head left, Midna will travel past the locked area and say you are on your own in making it over to her. On the far right of this area there is a level that will lower the gate. This will prevent water from entering the sewer and thus, will lower the water level. After navigating this area for other levers and loose goodies, head towards the gate where Midna is. You still can’t get through but with the water level lower there is a small passage on the side of the gate. Crawl through and defeat another Shadow Vermin. Turn the corner and reunite with Midna. 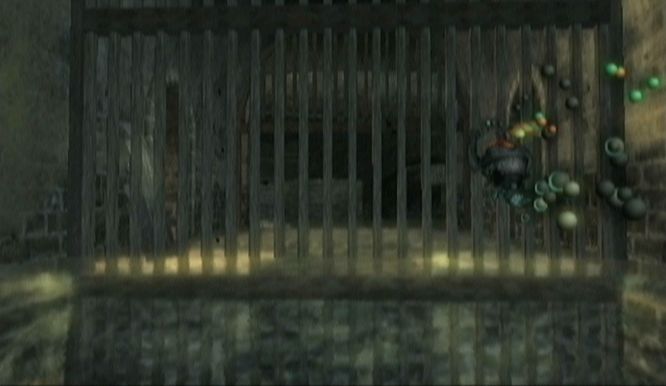 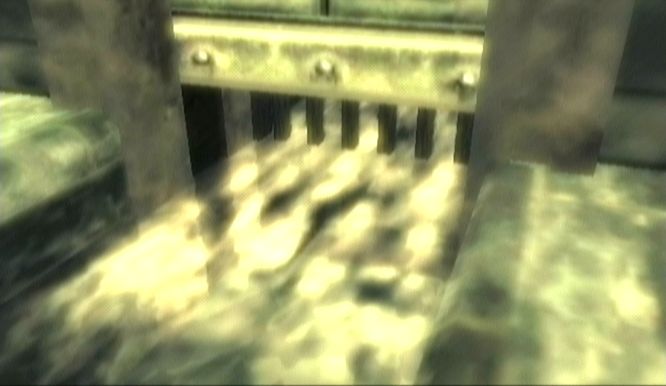 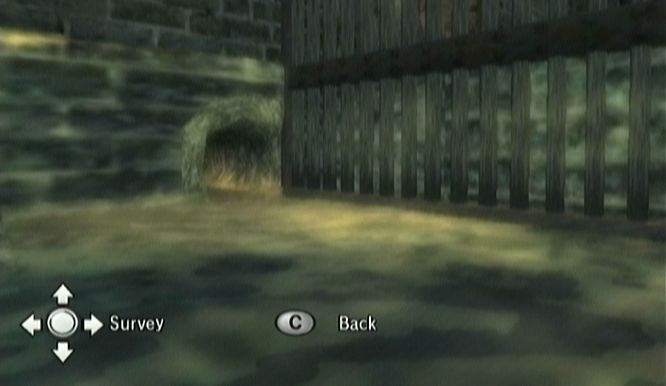 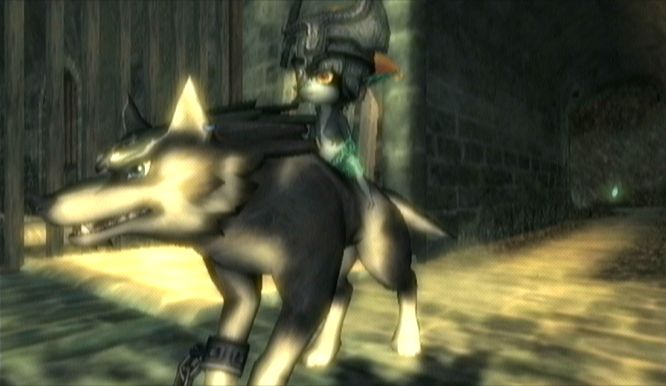 There is a large circular staircase straight ahead. Try scaling it but the ground will break underneath Wolf Link and he’ll fall to the bottom. Try once again and now when you get to the same point, Midna will be calling you so press up on the d-pad to talk to her. She helps you scale the stairs by traveling to the higher levels in which Wolf Link can then z-target and jump on over. 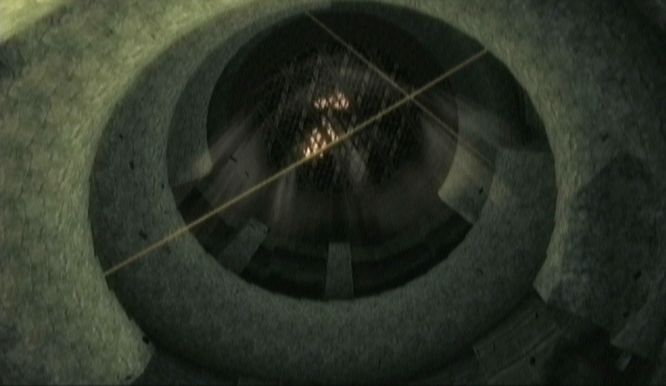 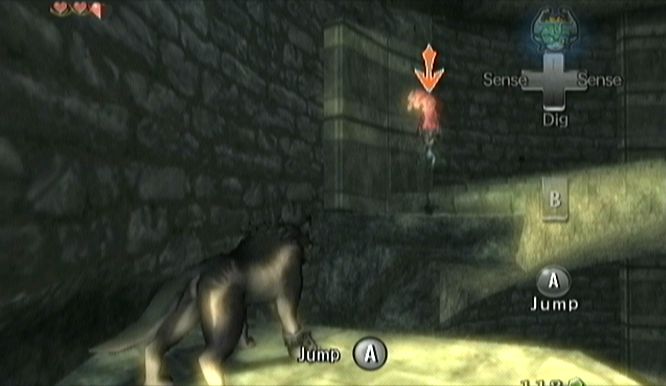 Begin scaling the staircase using Midna to leap across several large gaps. There are also a few tight ropes that extend across the circular tower which wolf Link can walk across but you need to be careful. 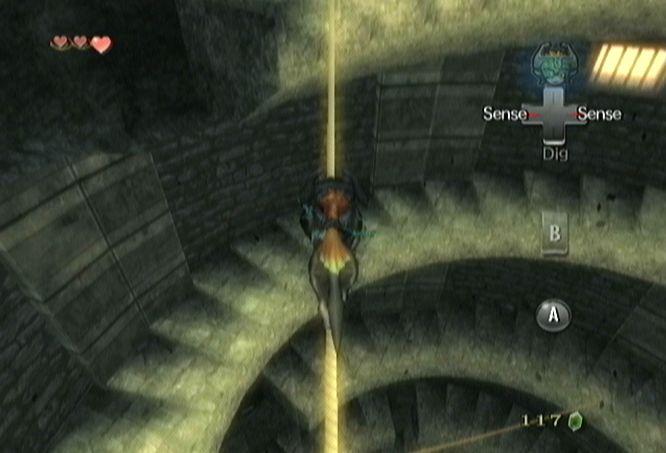 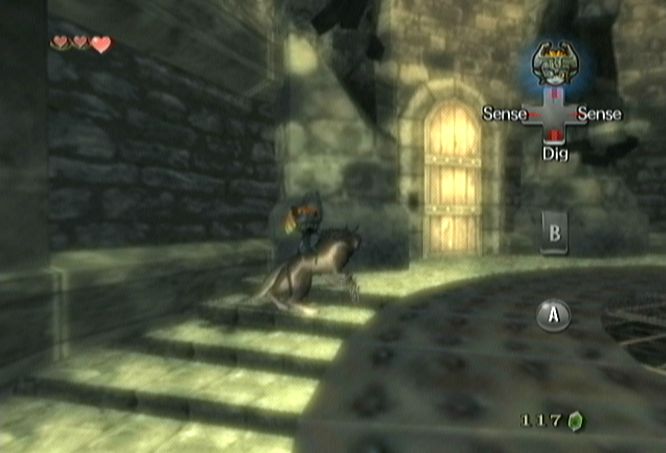 Once you reach the top, defeat three Keese that are in the area. These Keese are a bit different than the Keese we battled before. Since we are now in the world of Twilight, these are known as Shadow Keese. Other than a slightly different look, Shadow Keese are identical to regular Keese.

There is a door here but Wolf Link cannot open it. However, if you stand on the small rock and talk to Midna, she will tease you some more but then you can z-target her once again. Jump towards her as you scale to the top of the room. Make consecutive jumps to get to the top of the tower. Go through the open door. 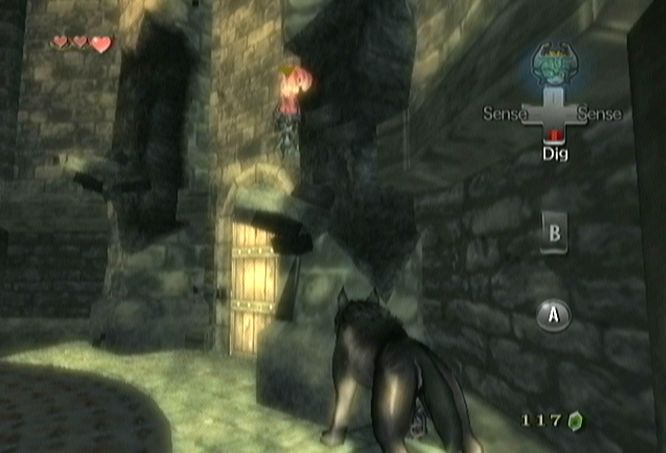 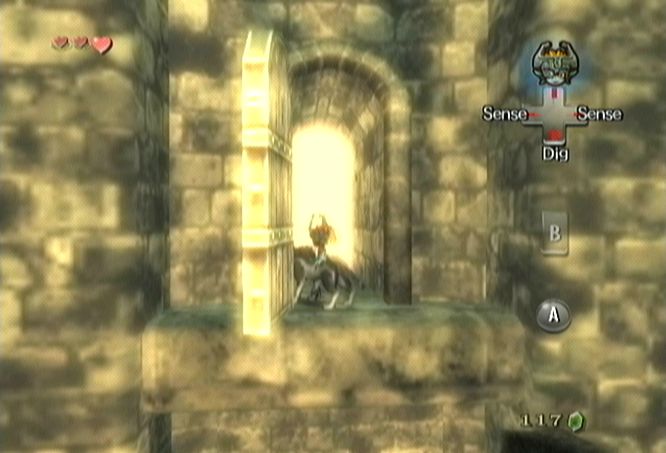 You’ll now be outside on the Rooftops. Midna praises the black cloud of twilight and calls it beautiful. She tells you that she wants to introduce you to somebody but this person is in the other tower. This area is quite linear so just keep following the path.

You’ll bump into a soldier spirit who gives it away that you are in Hyrule Castle. Walk over to the nearby crate and push it against the wall. Use it as a step to climb up to the higher ledge. Continue along the path and you’ll fight a few bird creatures known as Shadow Kargaroks. They aren’t too hard as two hits will defeat them, but be careful not to dash off the rooftop trying to attack them. If you do so, you’ll lose a heart and have to fight them again. 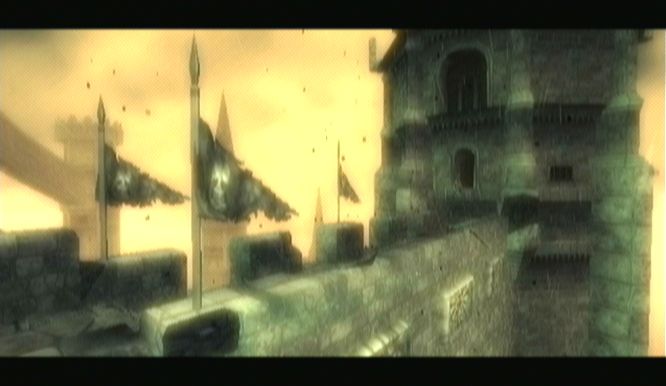 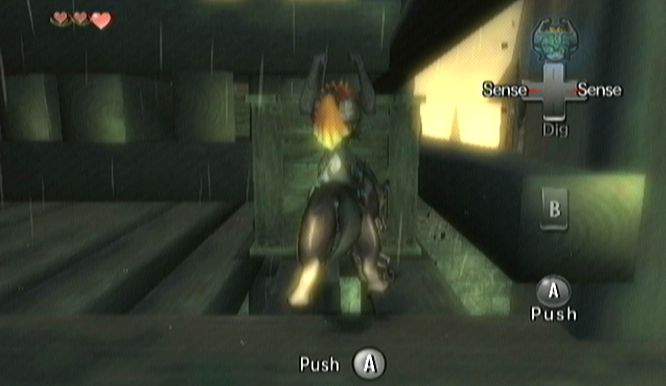 You’ll reach an area that has a wooden platform on the right. Talk to Midna and she will say that it is only a little further. Use her to jump across the large gaps. Fight off three more Shadow Kargaroks and finally make your way to the tower. Climb up the small steps and enter. 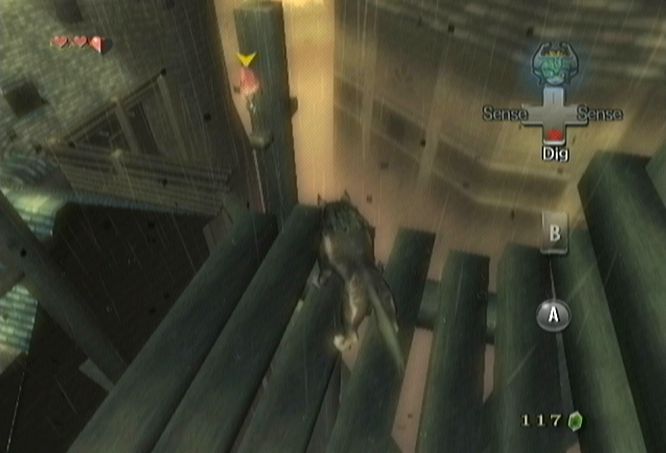 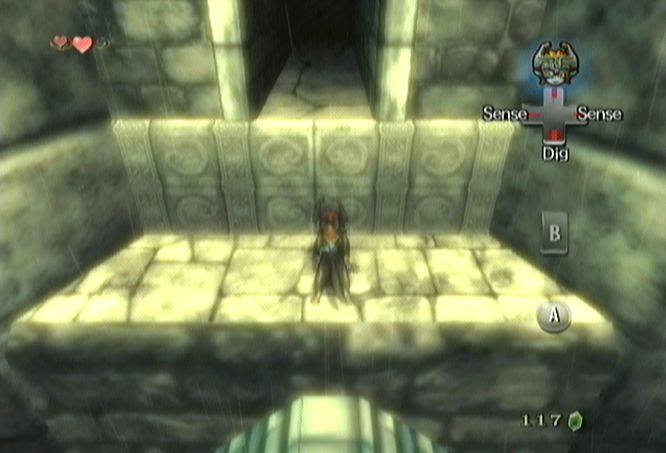 Climb up a few more steps and Link and Midna will meet up with a mysteriously girl who is revealed as Princess Zelda. She tells the story that this was once the kingdom of Hyrule but it has since turned into the world of shadows. A short cut-scene takes place showing the soldiers in Hyrule Castle and Princess Zelda being taken over by the shadow beasts and their leader Zant. The cut-scene explains that Hyrule was covered by twilight and the people of light became spirits.

Princess Zelda tells Link and Midna that they must leave before the guards find them. As Link starts heading down the staircase the guard will come and after a sequence of events; this will lead Midna and Link back outside to the rooftops of Hyrule Castle.

Midna reminds Link that Colin and Ilia are still missing and will ask Link if he wants to save them. Midna also reminds Link that he must do what he is told and then transports Link back to the spring in Ordon.

Link still is in wolf form when you gain control. Try leaving the spring and Midna appears once again and tells Link he has no choice but to listen to her. The land beyond the bridge is covered in twilight and Wolf Link cannot progress without the help of Midna. She demands Link gain a sword and shield before traveling through. 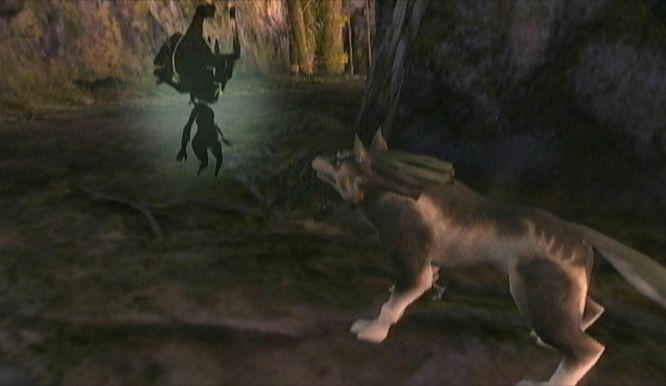 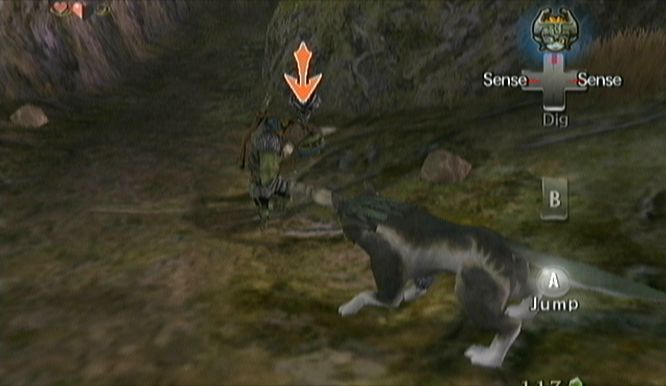 Run back towards Link’s house and you’ll find Bokoblins all over the place. Defeat them and return to the main part of Ordon Village. Before entering a squirrel will talk to you and thank you for defeating the enemies. The squirrel gives you advice that you should talk to animals if you run into trouble. As long as you are in wolf form almost all the animals will speak with you.

The residents of Ordon Village are scared with the appearance of enemies and the kidnapping of children so they’ll quickly run away if Wolf Link comes near. If you head to the west part of the village you will see Mayor Bo and Jaggle speaking to each other about a sword and shield. Don’t get to close or they’ll run away. Stand in the tall grass and eaves drop to find where they are.

Midna will point out that there is an open window at the top of the building and points to the watermill as a way to jump up. However, if you head around and try jumping up the watermill, Hanch will send a hawk at you. If you talk to the nearby cat he thinks you’re a good person and tells you to scare the man away. 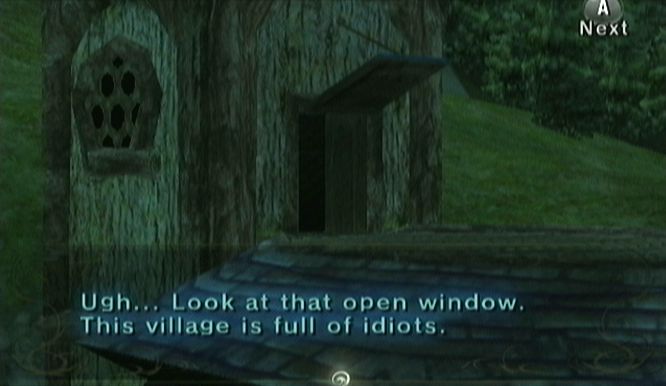 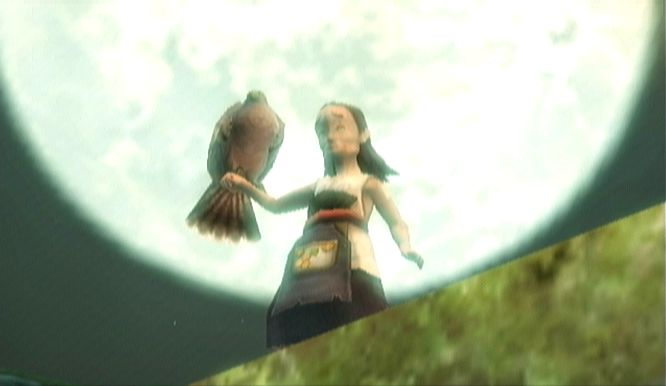 Stand north of Sera’s Sundries and use Midna to jump on top of the roof. Jump over to Hanch with the hawk and he’ll be so scared he’ll jump into the water. Now you have a safe path to jump to the watermill and then to the top of the roof. Enter the house through the window. 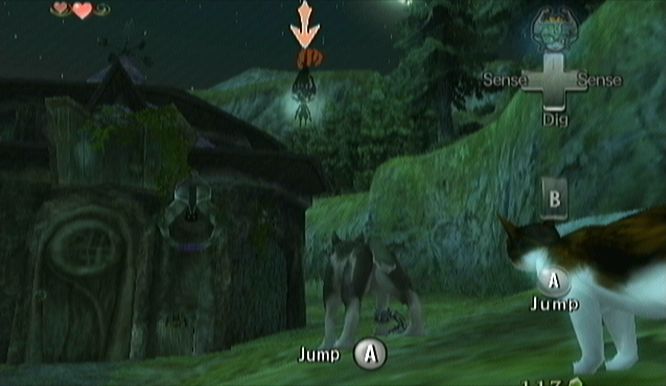 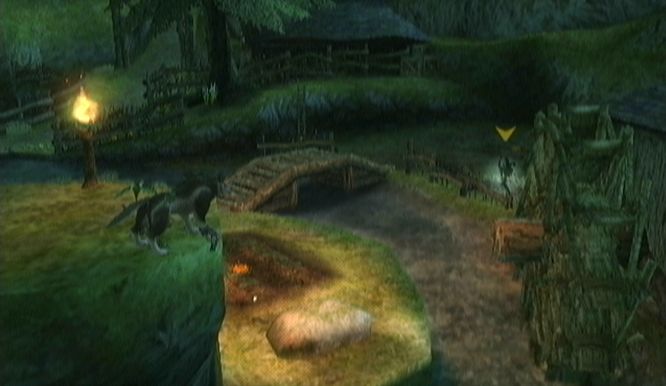 Jump off the bed and on to the table in the middle of the house. Face the other side of the room and Midna will see the shield. Use her to jump on over to the shield. Dash into the wall twice and the shield will fall to the floor. Walk on over to it and pick it up to get the Ordon Shield! 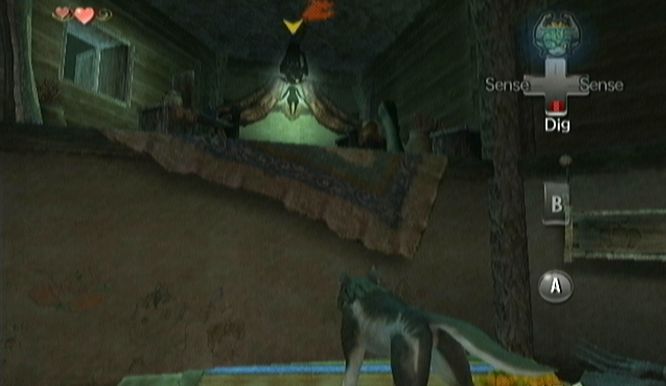 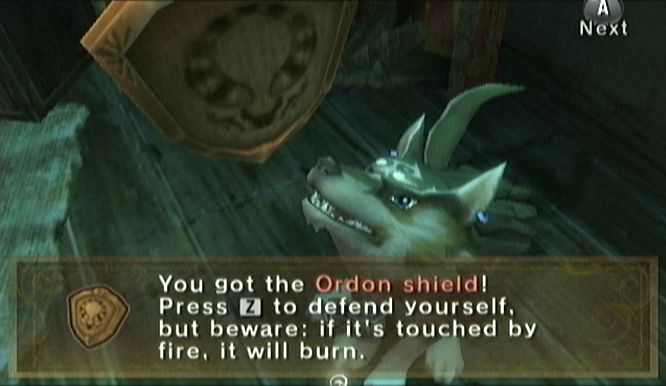 Jump out the window and you’ll see Rusl speaking with Uli and mentioning the Ordon Sword. If you run on over to their house in the southeast part of the village, Rusl will appear with sword in hand to protect Uli. Just walk around them to the right side of the house and use your sense to find sparkles on the side of the house. Dig into them and you’ll crawl under ground and into the house. Straight ahead on the chair is the Ordon Sword so walk over and grab it! Leave the house the same way you came in.

With sword and shield on your back, Midna tells you to return to where you first turned into wolf form. However, the area you really need to go to is the Ordon Spring. You’ll hear a spirit speaking to you so walk on over.

A wall of twilight surrounds Link and a Shadow Beast appears from the sky. This is the same creature that pulled Link into the twilight earlier. Just z-target him and attack the beast. Once you are attached keeping attacking with a few more bites and eventually he’ll disappear.

A cut-scene takes place where you will meet the Spirit of Light, Ordona. He briefly gives some back story of the four spirits of Hyrule and how the King of Twilight, Zant, wants to take over the world. There are three light spirits who have lost their light and they need to be revived. Ordona explains that Link can return to his true form if he revives the light spirit.

Once you gain control of Wolf Link once again, travel across the long bridge and enter the Twilight Realm. Midna will head through and then pull Wolf Link in.