This chapter covers the normal mode of Twilight Princess for the Nintendo Wii. If you are playing on the Nintendo Wii U, check out the Sacred Grove: Round Two – HD Version.

With the newly acquired ball and chain many secrets have opened for us. Use Midna and warp to the Snowpeak warp point. Run to the west and back into the cave that we went through earlier. Jump down through most the cave, defeating the Ice Keese as you pass them. At the far west of the cave, use the ball and chain to break the two blocks of ice. One of these blocks has a Poe waiting for you inside. Transform into Wolf Link and defeat it for the 49th Poe Soul. 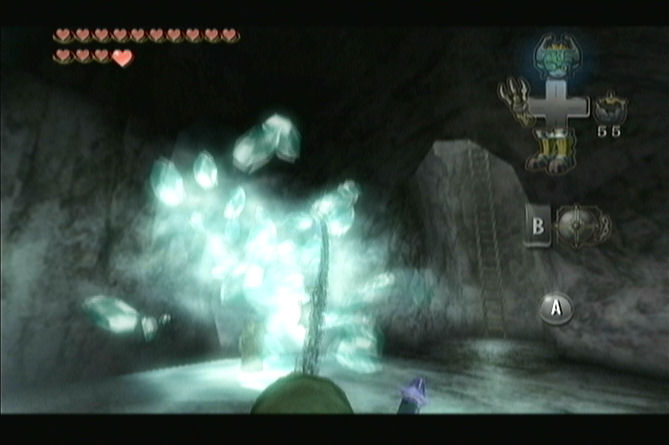 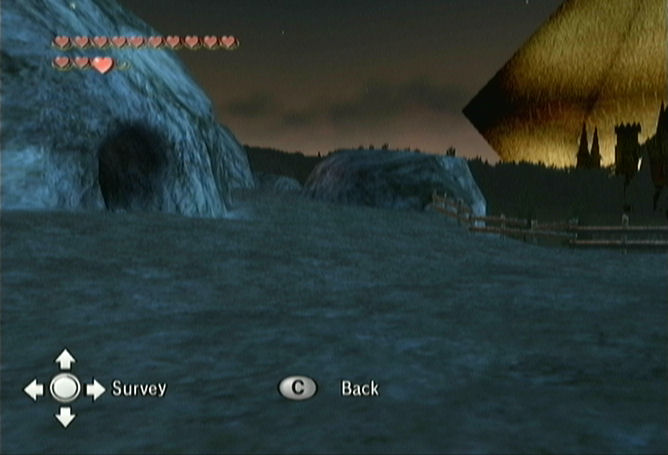 Follow the rocky path and at the split, take the path on the right that leads Link into the higher region that has a rocky surrounding. Continue on in this direction and the path will split again. The path to the north leads to the Zora’s Domain. Take the path on the left. A little ways down you’ll run into a cavern on the right side against the wall. We blew up the boulder that was blocking the cavern earlier. If you haven’t blown up the boulder before hand, do so now. You can also collect the golden bug that is nearby if you haven’t already. Enter the cavern.

Break the ice that is straight ahead with the ball and chain and walk forward. It is a similar puzzle in this cave that we faced earlier in the Snowpeak Ruins. Link has to push the three blocks so that one of them is on the switch. These ones are a bit more complicated than the ones we did before. Start by pushing the block that is at the northeast corner to the west. Then push the block in the southwest corner to the east and then north. Now push the block that is in the northwest corner south, east, and then north. Finish off the puzzle by pushing the northern most block to the west, south, east, and then north, landing on the switch. 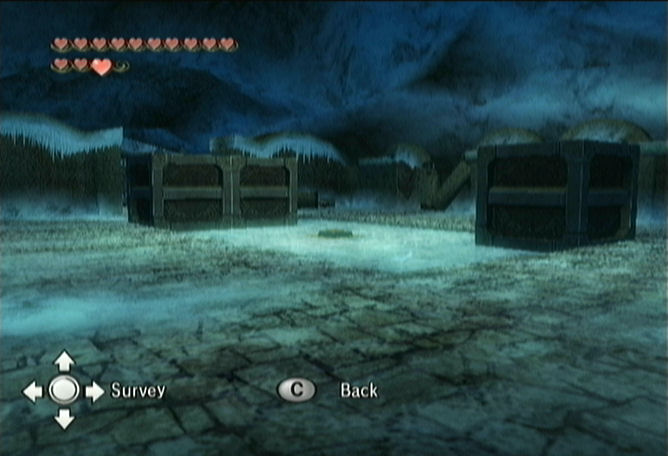 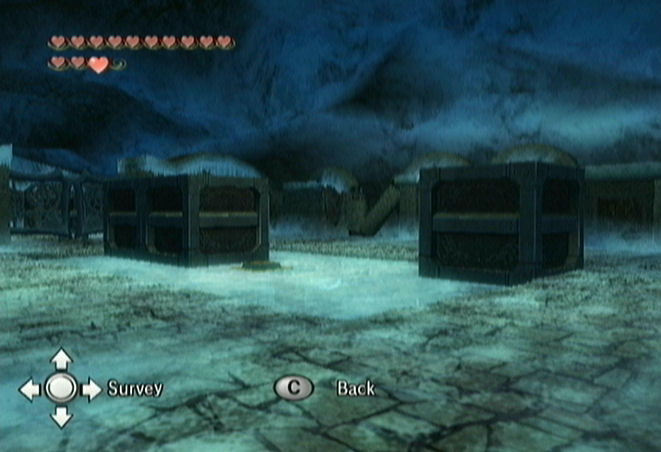 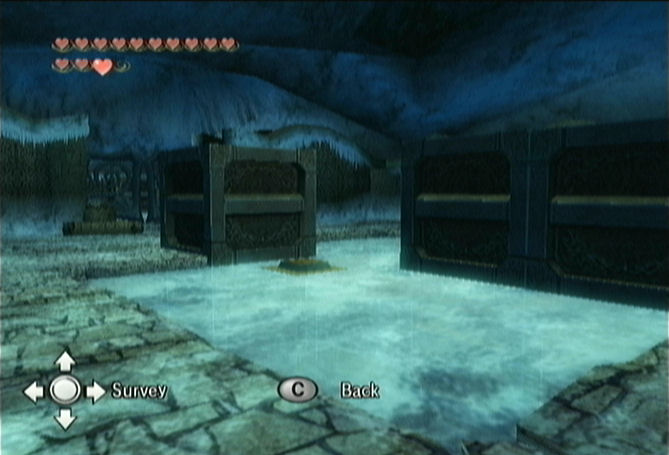 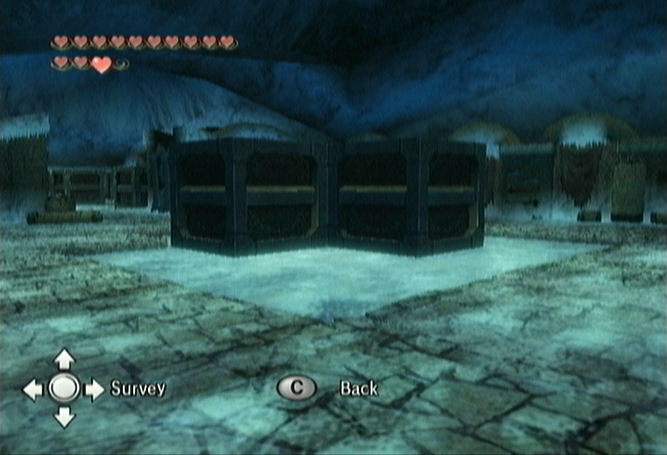 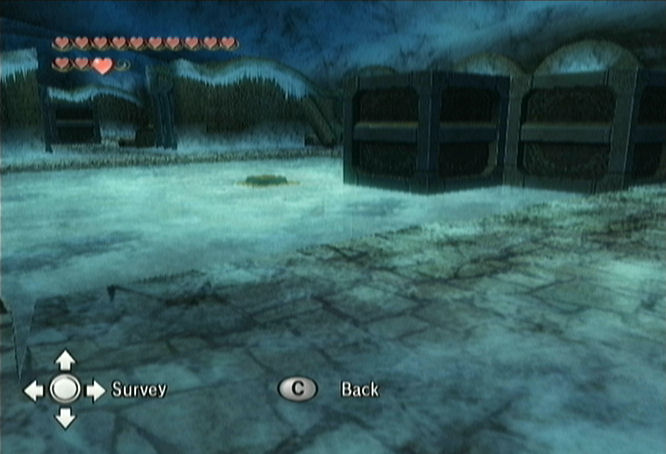 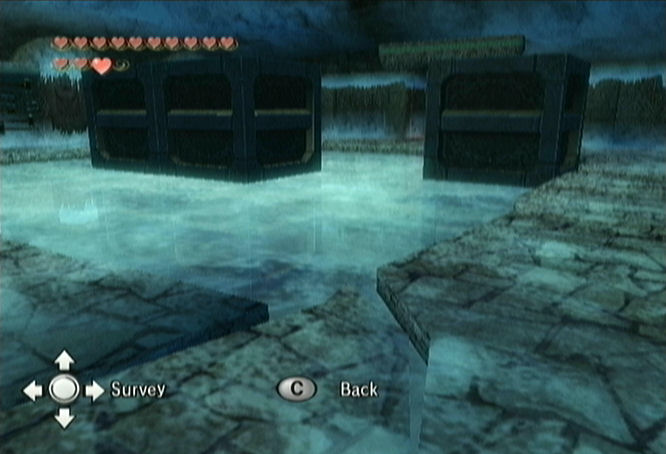 Walk to the passage to the north and open the treasure chest to get a Piece of Heart. Leave the cavern and then use Midna to warp to the Castle Town warp point. Enter the Castle Town and make your way to Telma’s Bar. As you enter Castle Town, you should have received a letter from Yeta. She explains that she is feeling much better and that you should come visit any time.

You can speak with Telma to learn that Rusl has made his way to the Faron Woods. Looking at the map, you’ll see his location is just outside the Forest Temple. Leave the bar and then use Midna and warp back up to the Snowpeak top.

Transform back into human Link and walk towards the tree to the east where you’ll see Yeta and Yeto. Yeto says it is a nice day for sleds and asks if you will try. Agree to do so and a mini-game begins. The first race is a simple race to the mansion with Yeto. Just hold forward to speed up and the race should be no problem. About two-thirds down the path you’ll notice the path curves off to the right. If you take this shortcut, you’ll be able to get a quicker time. The shortcut is clearly seen on the map. 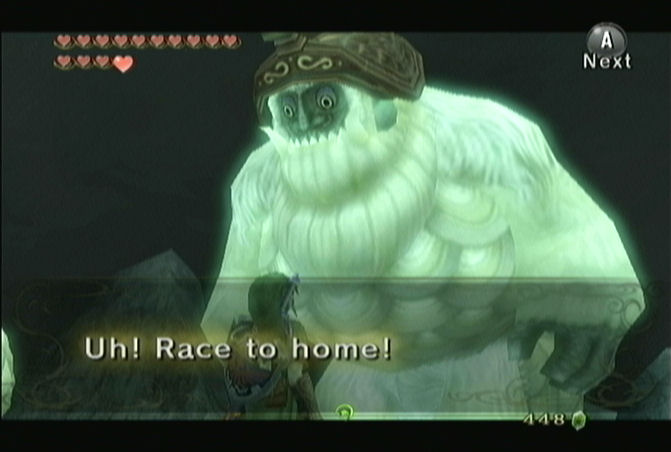 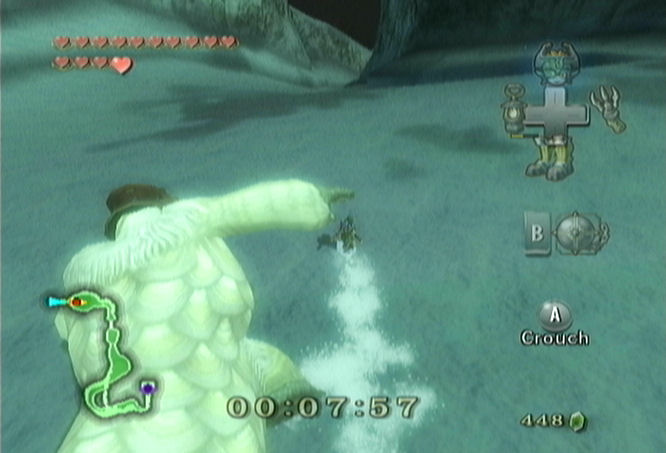 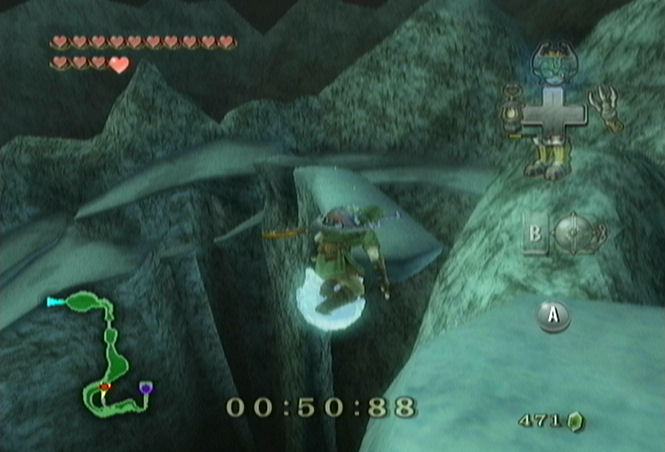 After defeating Yeto in the race, move away from Yeto and Yeta and warp back to the top of Snowpeak. Walk over to the tree and speak with Yeta. You’ll now race with Yeta and she is much faster. You must take the shortcut in order to beat her since she will take the shortcut as well. It is pretty difficult to beat her and may take several tries. She awards you with a Piece of Heart for beating her.

Walk away and then use Midna to warp to North Faron Woods.

16.2 Return to the Sacred Grove

Once you arrive in North Faron Woods, transform into human Link and then walk north towards the Forest Temple. Speak with Rusl and he’ll talk about the Sacred Grove once again. He speaks of gaining the power of those ancient people. He then asks you to cross the gorge and find the ancient power. He then calls over his partner and tells you to use him to get over the gorge. 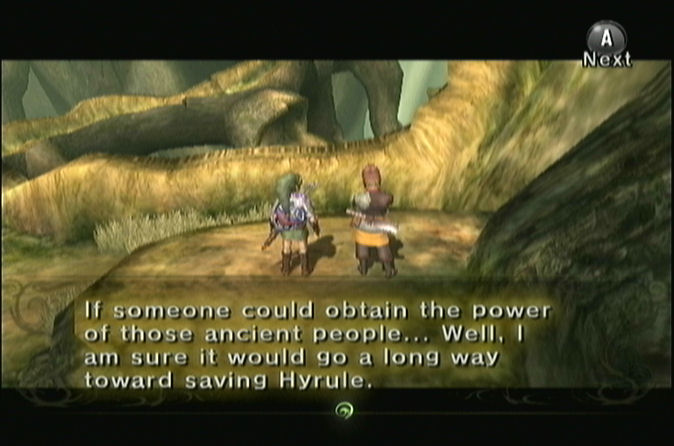 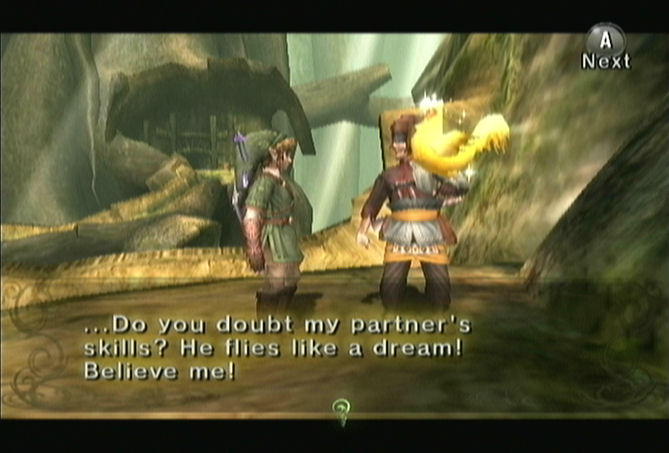 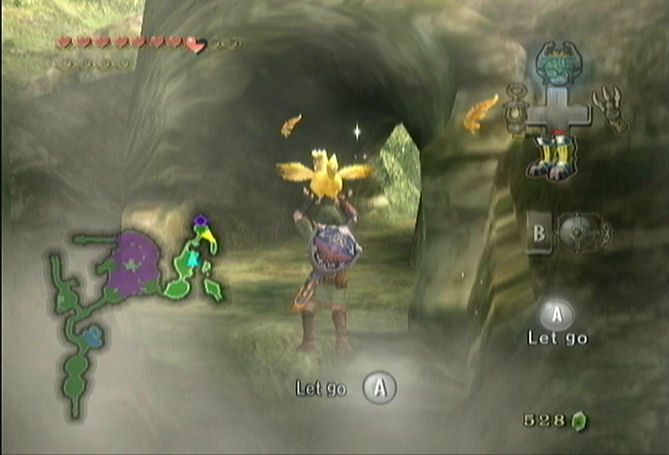 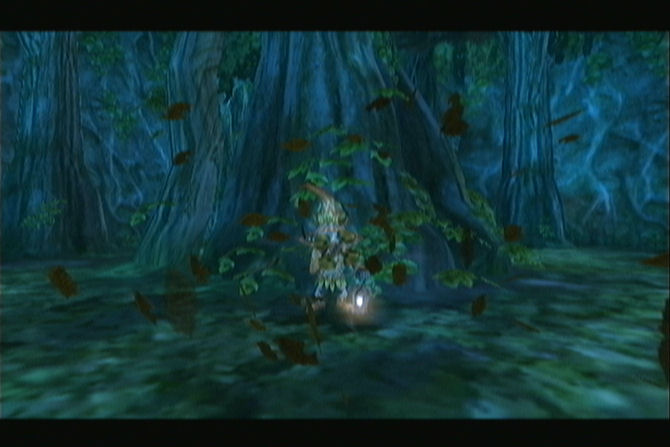 Use the golden cucco to float over past the swinging branches to get to the southern platform. There is a howling stone here, so activate it if you didn’t the first time around. Enter into the Sacred Grove.

Walk forward and that same annoying Skull Kid will appear. He’ll blow his horn and create four Puppets before running off. This part of the Sacred Grove is pretty identical to the previous one, but a bit harder since there are more paths to go and it is easy to get lost.

Follow him straight ahead and since it is dark outside, you’ll see his lantern glowing. Follow along the path to the right to get to the next area. He’s on the higher ledge to the right, just as before. Jump up and strike at him with your sword and then he’ll run off.

Continue northward through the next hole and you’ll see the light of his lantern. If you look up, you’ll also see the lantern of a Poe. Walk behind the waterfall and then transform into Wolf Link. Defeat the Poe and steal its soul for the 50th Poe Soul. Jump off the ledge and then go through the hole on the other side of the room where you see the Skull Kid’s lantern floating around. 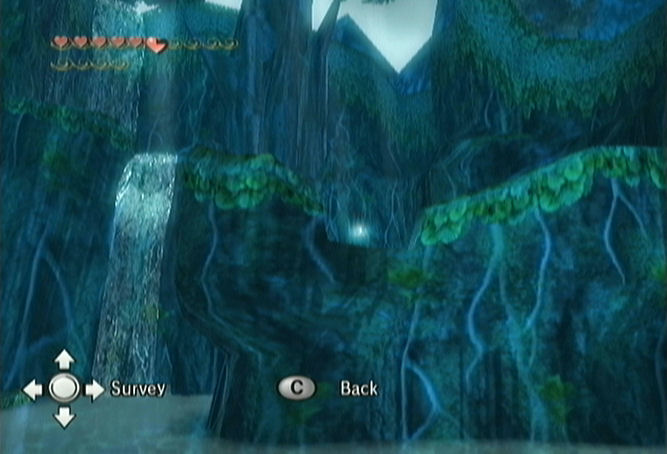 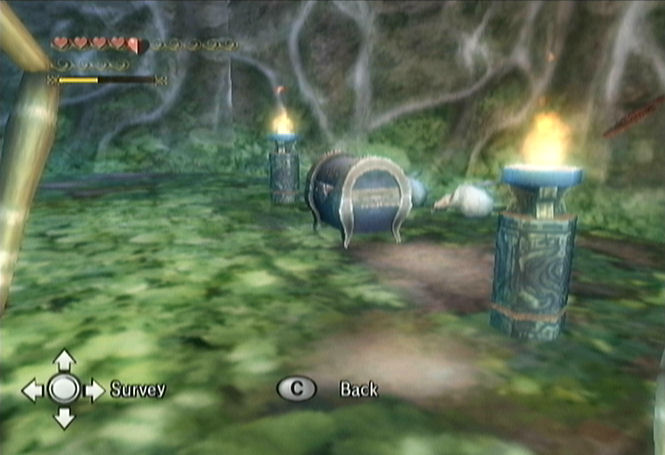 In this large central room just head straight and you’ll see his lantern brightening up another path. There are two torches here, which can be lit to find a treasure chest with some bombs. Continue following the path where the light shows you to get to the next area. The Skull Kid will be on a platform above the water here. Use the bow and arrow to shoot an arrow at him. He’ll run off and create a new path to Link’s right, follow him.

Continue following the light of the Skull Kid as he takes you back through several areas that you have already been. He’ll lead you back to the waterfall area at the beginning of the Sacred Grove. Walk through the path that forms between waterfalls and follow his light.

Continue following his lantern as he goes into circles. He’ll eventually settle in the large middle room that has several openings. You’ll hear him playing his instrument. Climb up the large tree stumps to the top part of this area. Look towards the middle and you’ll see him on top of the trees. Shoot him down with an arrow and he’ll run and open a nearby path. 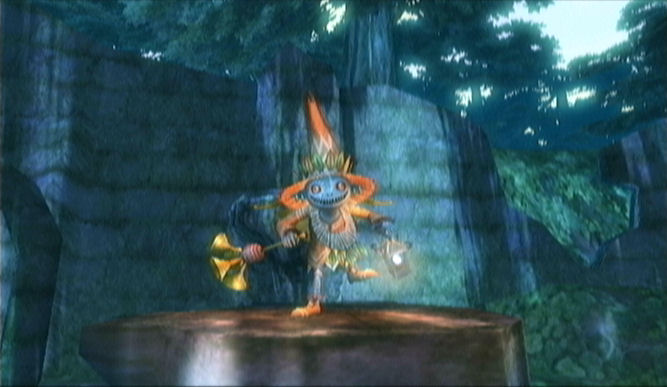 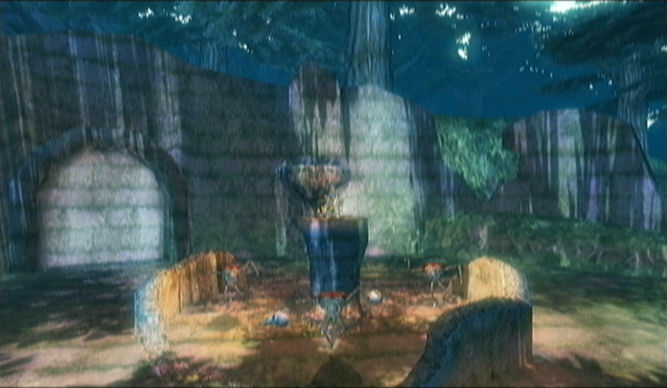 This battle is almost exactly the same as it was the first time around. Skull Kid will keep calling out Puppets in this area. Defeat the Puppets as he calls them out and then take out your bow and arrow, and shoot him before he summons more Puppets. 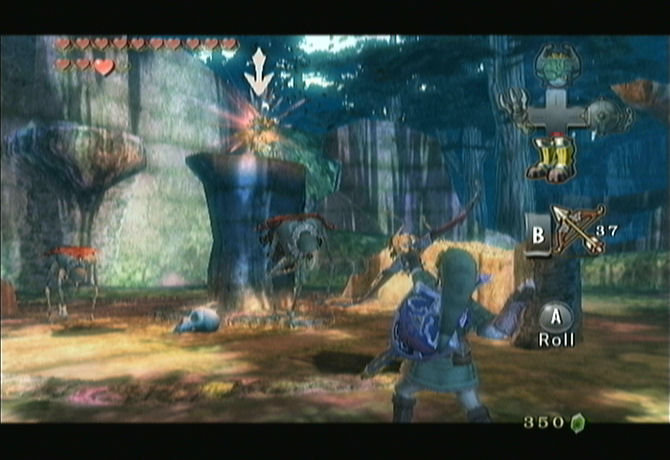 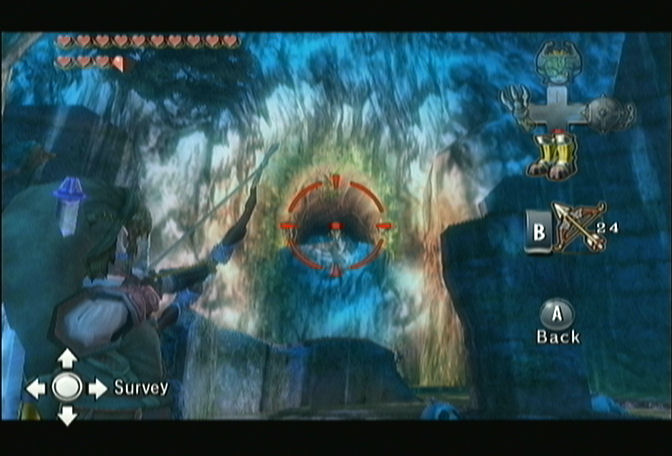 Keep repeating this process a couple of times and eventually Skull Kid will give up, and let you head off to the next area. Follow him to get to the ruins area of the Sacred Grove.

16.3 Entering the Temple of Time

We are now in the same area where we originally got the Master Sword, except we are on a higher southern ledge. Push down the block nearby, and head to the middle of the ruins. Return to the area where you got the master sword and if its night time a Poe will be floating around. Defeat it and capture your 51st Poe Soul.

Transform back into human Link and then walk up to the pedestal that held the Master Sword. Press A when standing next to it and it will strike. (If the option to Strike isn’t there, remember to equip the Master Sword if you haven’t) Doing so will cause a statue on the southern part of the ruins to disappear. Make your way back in that direction and a wall of twilight will appear and five shadow beasts will drop from a warp portal. Defeat three of them and then finish two of them off at the same time. 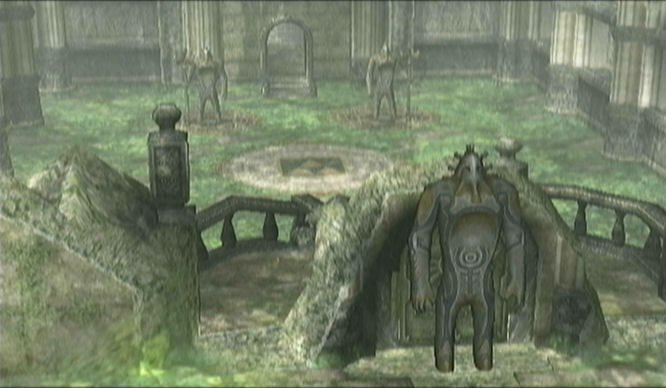 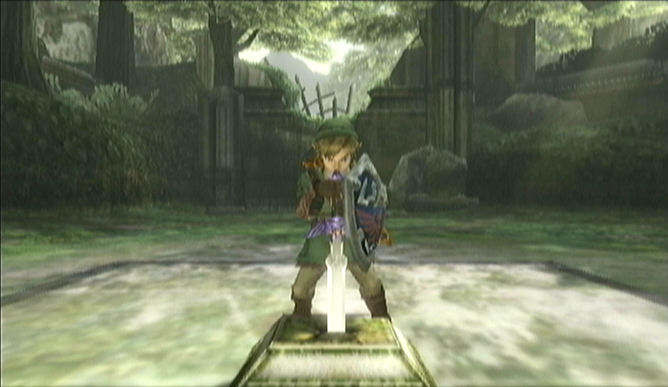 Walk back towards the south end of the ruins and climb up the block that you pushed down. Walk up to the door that is now accessible since the statue is no longer in your way. Open it up and Link will walk through the door to appear in the Temple of Time. 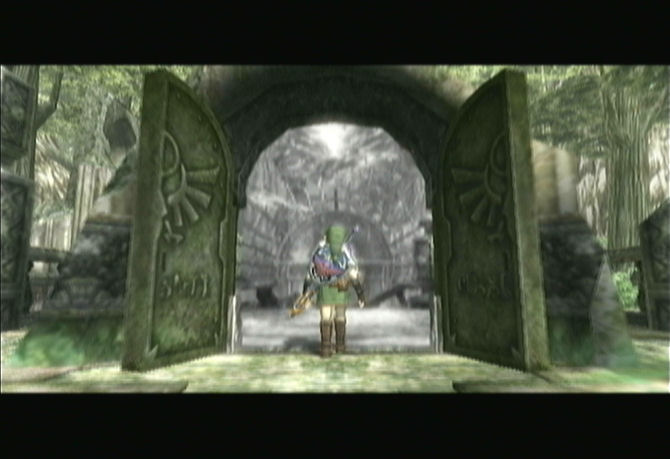 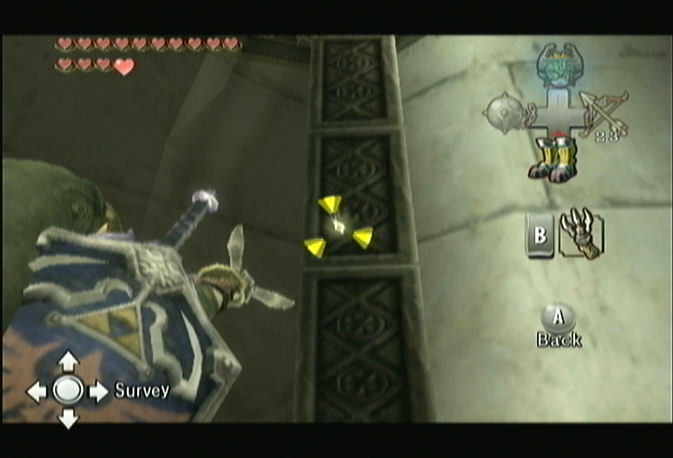 Walk down the stairs and take a u-turn to the left. Against the wall you’ll find the 24th and final golden bug, the Female Snail. Use the gale boomerang to capture it and then leave the Temple of Time through the same way you came in.

Talk to Midna and warp to Castle Town. Transform back into human Link and walk into town. Now that we have all the golden bugs, head on over to the south part of town and enter Agitha’s Castle. Speak with her and give her all the remaining golden bugs that you have. As a reward for you work, Agitha will reward you with the Giant Wallet. Link can now hold up to 1000 rupees. Leave Castle Town and then use Midna to your newest warp point, the Sacred Grove. 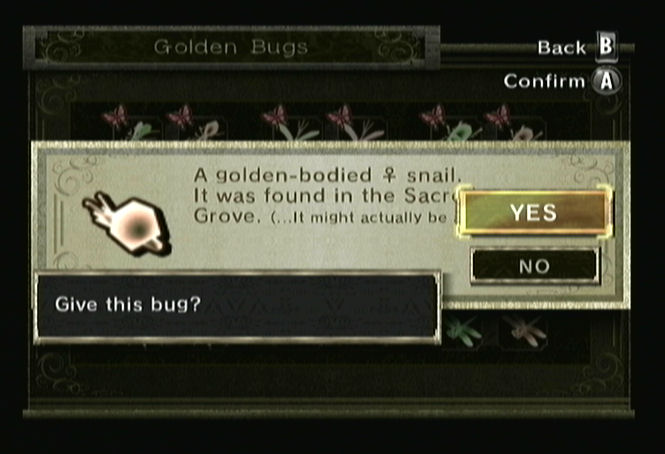 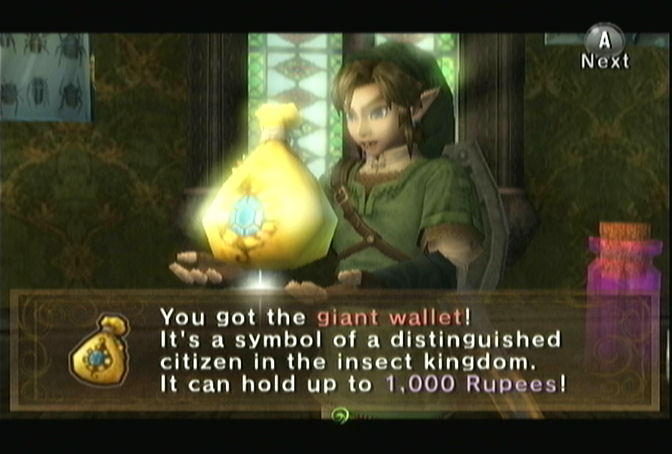 Climb up to the north side of the ruins area and once again enter into the Temple of Time. Walk down the stairs, past the guard statues, and to the pedestal. Strike your sword into the pedestal and a holographic staircase will appear, leading into a window. All of a sudden our friend Ooccoo will appear and run up the steps. Follow upwards and as you get close a passage will open up. Continue northward to enter the next temple, The Temple of Time.