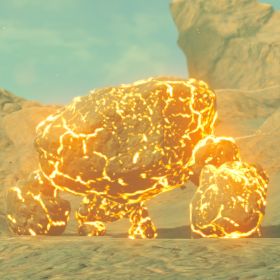 The Igneo Talus is a variant of the Stone Talus which appear in Breath of the Wild. Like their normal counterparts, Igneo Talus hide in the ground as large, molten rocks that only begin to form once Link comes close enough.

Igneo Talus are commonly found in the Eldin Region of Hyrule, most commonly on Death Mountain. Link is most likely to encounter his first Igneo Talus to the southwest of Gortram Cliff if he chooses to follow the trail to Goron City.

Igneo Talus attack in the same manner as other Talus, they will use their arms and body in attempt to crush Link, however, they now cause explosions which can damage him, either by throwing its arms, or slamming its body against the ground. The other challenge the Igneo Talus presents is that its body is far too hot for Link to climb. Climbing onto, and standing on the boss will cause Link to take damage at a fast rate. This can all be avoided, however, with the use of any cold-powered weapons, including Ice Rods and Ice Arrows. Attacking the Talus with any cold weapons will cause it to be stunned, and put out the fire coursing through its body, giving Link time to attack the Ore Deposit on its body, however, the Igneo Talus will try to relight itself after a short period of time.