From Zelda Dungeon Wiki
Jump to navigation Jump to search
Want an adless experience? Log in or Create an account.
Risa 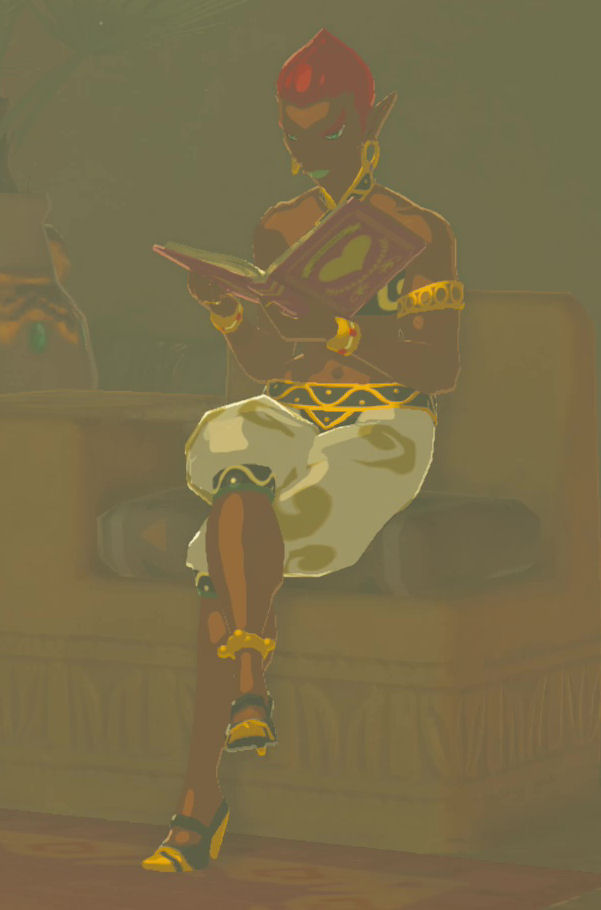 Risa is a character from Breath of the Wild.

Risa is a Gerudo who lives in Gerudo Town. She is a young woman about to set off to leave Gerudo Town. In preparation, she is taking both of Ashai's class, Voe and You class during the day, where she will learn how to handle situations when dealing with men outside of Gerudo Town. Risa is only taking Ashai's class as a refresh course, but she still has to study.[1]

When Link listens in to the lesson, Risa repeatedly gives answers that are not acceptable, at which Ashai will call her out. When given the scenario where a handsome man approaches you, Risa states that she would casually walk toward him and then strike him with a fierce blow when he least suspects it.[2] Ashai responds that attacking a man like this would be a crime.[3]

In the next scenario, Risa is asked what she would do if she found an injured man lying on the ground. Risa says she would take him and secretly bring him back to her home, nursing him to health.[4] At which point Ashai responds that this might be good intentioned, but that is basically kidnapping.[5] The final scenario is what would you do if a man who you are interested in abruptly engages in a conversation with you. Risa responds that she would grab his hand and twist his wrist until he agreed to marry her.[6] Ashai tells Risa that maybe the two need to talk after class.[7]

Unlike Pasha and Dina, Risa does not also take Ashai's cooking class at nighttime. Instead, she remains in the classroom until 11pm before finally heading home.[8][9]

Risa lives in a home behind Ardin's mushroom shop. At nighttime before going to bed, Risa will stand and talk to a stick figure human that she has in her bedroom. She practices talking to it, as if it was a man. She tries to hit on the man, giving information about herself, such as how she can make some salted rice balls. She will repeatedly get angry with Link if he eavesdrops on her practicing.[10][11] She also talks about a man could really hold his liquor and how they turn red when they drink too much, although that doesn't happen to Gerudo as they are already red.[12] Lastly, she talks about meeting a man and wanting to invite him back to her home at nighttime, but can't due to men not being allowed in Gerudo Town, but thinking it might work if they were elsewhere.[13]

Risa never actually goes to sleep, but keeps practicing well into the morning. At 11am each morning, she will head back to Ashai's class.[14]