From Zelda Dungeon Wiki
Jump to navigation Jump to search
Want an adless experience? Log in or Create an account.
Quadro Baba 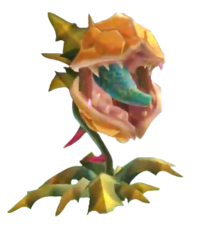 A Quadro Baba is a new variation of the Deku Baba found in Skyward Sword. The Quadro Baba is a stronger variation of the standard Deku Baba. They are gold in color and attack Link in the same fashion as a standard Deku Baba by lunging towards Link, attempting to bite him. Its mouth is divided into four parts, rather than the two halves of its standard counterpart. This allows the Quadro Baba to alternate directions in which its mouth opens, meaning Link has to slash either horizontally or vertically, depending on how its mouth is open.

Although it takes longer, the Quadro Baba can also be defeated by using a lunge attack no matter which way the mouth is open. Once the Bow is obtained, the Quadro Baba can be swiftly defeated from a distance with a single shot to the mouth. Additionally, unlike standard Deku Babas, Quadro Babas take multiple hits to defeat and are considered to be quite challenging.

Quadro Babas can be first found in the Deep Woods. They are also found within the Skyview Temple, but later on in the game, they are found throughout the Overworld, including the Faron Woods.