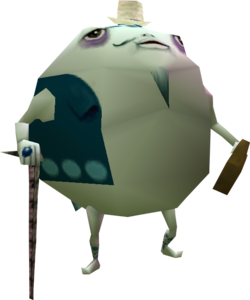 Toto is a short Zora from Majora's Mask. He is the manager of the popular and world famous Zora band: The Indigo-Go's. He went to Clock Town, where they were originally going to preform, to cancel their anticipated performance due to Lulu losing her voice. During the day, Toto can be found in the mayor's office. At night, he can be found sitting in the Milk Bar. Toto gives Link the Circus Leader's Mask if he goes on stage and plays a musical instrument with all of his mask transformations; Ocarina (Link), flutes (Deku Scrub), drums (Goron), guitar (Zora)). The song that they eventually play is "Ballad of the Wind fish."