This article is about the boss fight with Onox. For his character profile, see Onox. 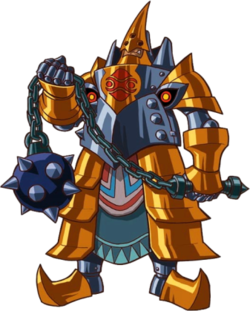 General Onox serves as the final boss of Oracle of Seasons and the battle consists of two distinctive forms.

The battle against Onox takes place in Onox's Castle. It is a difficult battle, so taking a Magic Potion is recommended. During the first phase of the battle, Onox carries a large ball and chain which deals damage if Onox successfully hits Link with it. He swings it around his head and slams it onto the ground, which causes debris to fall, which also causes damage. He also might jump, which causes boulders to fall from the ceiling. To fight him, Link must hit him with Spin Attacks (regular sword slashes do not hurt him). After taking a few hits, he sends Din in front of him as a barrier. Attacking her with Link's sword causing Link damage, so he must get her out of the way with the Rod of Seasons. After a few more hits with the Spin Attack, Onox disappears. As soon as Link tries to grab Din, she disappears as well, and the floor starts caving in. Eventually, Link falls down into the floor, beginning the second phase of the battle.

Once fallen through, Link encounters Onox once again. Unlike the previous phase, Onox transforms into his true form, the Dark Dragon. He has a variety of attacks; he spits blue fire at Link, he flies to one side of the room and slides his hand across the ground, harming Link on contact, and he tries and slam his hand down on top of Link. This is where Link's only chance of attack. He must jump onto Onox's hand, and once he raises it up again, hit the jewel on his head with constant sword slashes. After many hits, Onox is finally defeated.