From Zelda Dungeon Wiki
Jump to navigation Jump to search
Want an adless experience? Log in or Create an account.
Malena 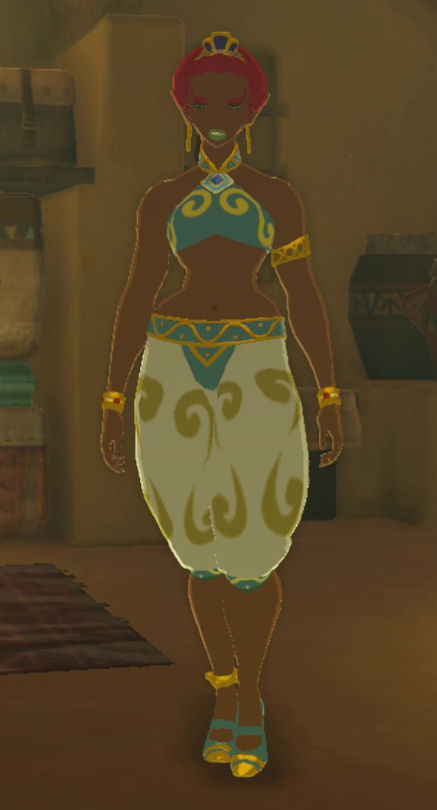 Malena is a character from Breath of the Wild.

Malena is a Gerudo who can be found in Gerudo Town. She recently got married to a man and moved away, but had to come to town as he husband is very sick. He has a rare disease of which the only cure is the innards of a Molduga.[1] In the morning hours, she heads to the Barracks where she talks with Babi. However, with all the problems going on in Gerudo Town, Babi is not able to help out and warns her that she shouldn't be at the barracks.[2]

In the afternoon, Malena will make her way to the main part of town, where she speaks with Reeza, one of the Gerudo Guards. Unfortunately with times so though, Reeza is not able to help Malena out.[3] At 10pm each evening, Malena will head over to the Hotel Oasis to spend the night. Even at nighttime, she dreams of saving her husband.[4]

After Link speaks with Malena, this will begin the Medicinal Molduga quest. Malena describes the Molduga a savage monster that is so dangerous, other monsters won't approach it. She has spotted one just to the west, at the Toruma Dunes, as well as another one just south. She knows that Molduga are very sensitive to vibrations and will attack anything that moves near.[5] Nobody who goes to face off with a Molduga comes back unscathed. She knows that its very dangerous, but she loves her husband, she can't give up.[6][7]

Malena also tells Link that it is very hot in the region where the Molduga can be found, telling Link that if he ventures in that direction, he should wear the proper gear.[8]

After Link travels to the Gerudo Desert to defeat a Molduga, he can return to Malena in Gerudo Town. After talking to Malena, she will thank him for bringing her some Molduga Guts.[9][10] She will reward Link by giving him a Gold Rupee, indicating that the guts will be able to save her husband.[11] She gives her deepest gratitude that her husband will be cured at last. She then prepares for her journey to head back to her husband.[12]

Afterward, Malena will return to the Hotel Oasis temporarily. She will ask Link what he name is. If Link says he's just a traveler, she will reply thinking that Link is just being very modest. She hopes to one have a baby and hopes she grows up to be like Link.[13] If Link replies that his name is Link, Malena will comment how that sounds like a man's name. Nevertheless, she says that if she has a baby girl, she may name her after Link.[14][15] Malena will soon leave the Hotel Oasis, at which point she will no longer appear anywhere in the world.