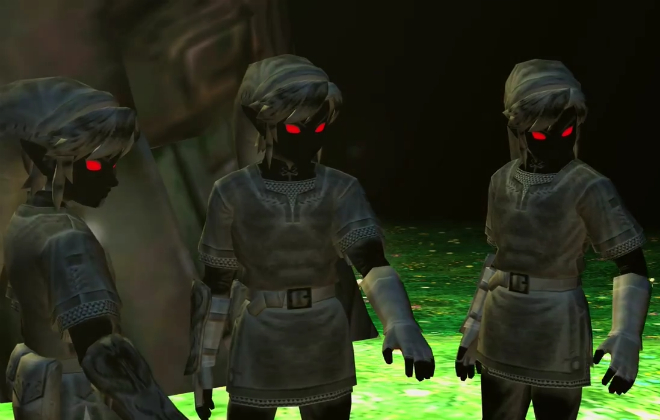 The Interloper Conflict is one of the many wars over the Triforce, which takes place in the time period before Ocarina of Time. This tale of conflict is told in Twilight Princess by the Light Spirit Lanayru. This event involves a dark tribe of sorcerers known as the Interlopers, who looked to seek domain over the Sacred Realm.

The exact events of this specific war is not officially made clear, however, the conflict seems to take place some time after the events of Skyward Sword and before the Era of Chaos. This is due to the fact that the Sacred Realm was sealed within the Era of Chaos and was only breached once again during the events of Ocarina of Time.

Creation and the Triforce

Following the Creation of Hyrule, the three Goddesses departed the land they created.[1] [2] The place where the Goddesses descended became to be known as the Sacred Realm.[3] The golden land became to be the resting place of the most powerful relic to brace Hyrule, the Triforce.[4] This golden power would grant the holder any wish they so desired. Hyrule was at peace for many years, however, word soon got out about the Triforce. Many people lusted over this great power and a great war ensued.[5]

Invasion of the Sacred Realm

During this great war, a tribe of sorcerers existed, called the Interlopers, or by common phrasing, Dark Interlopers. This tribe excelled in shadow magic and intended to use the power of the Fused Shadow to seek domain over the Sacred Realm.[6] Fearing the worst, the Goddesses reached out to the Light Spirits of Hyrule.[7] The three Light Spirits then intervened and took the Fused Shadow and sealed it away.[8] Three of the fragments were sealed within temples across Hyrule while the other was sealed away with the Interlopers. With the power of the Fused Shadow gone from their grasp, the tribe was left powerless, thus they were banished to the Twilight Realm. With the dark tribe and their ancient power now sealed away, Hyrule once again became a land of peace.