From Zelda Dungeon Wiki
Jump to navigation Jump to search
Want an adless experience? Log in or Create an account.
Bozai 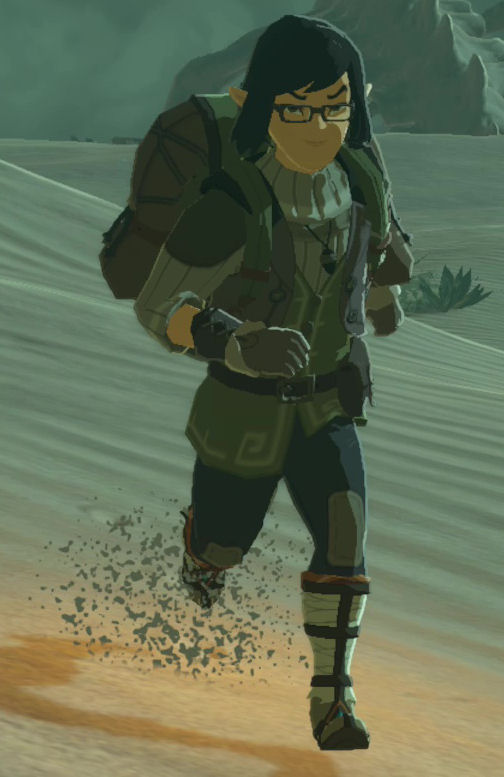 Bozai is a character from Breath of the Wild.

Bozai is a Hylian male who can be found running around the perimeter of Gerudo Town after Link has acquired the Camera rune. He is a single, 35 year old who loves jogging and chatting with women.[1][2] The truth is that Bozai had heard a rumor that Gerudo women liked men with Sand Boots, so he's jogging around, hoping to get their attention, but none of them will talk to him.[3]

He explains that Sand Boots will let Link walk normally on sand. Unfortunately the man who used to make them passed away, so they are now very rare and extremely valuable.[4] However, since Link is a male, Bozai will not consider giving him the sand boots.[5]

If Link chats with Bozai while wearing the Gerudo Clothes, Bozai thinks that Link is a woman and will try to make his move on him. Using the Sand Boots as a talking point, he invites Link to go to a quiet corner and spend time together.[6] When Link admits that he just wants the Sand Boots, Bozai is a bit hesitant, but thinks this might be his golden chance to finally meet somebody. Bozai offers to give them to Link, but first asks him to do him a favor.[7]

Bozai will tell Link about the Seven Heroines, but then he talks about the secret Eighth Heroine — a legend that is known to all, but has been seen by none. Bozai will task Link with finding the heroine and in return, he will give Link the Sand Boots.[8] The eighth heroine is found in the Gerudo Highlands, with the nickname The Bronze Giant. Although that is all that Bozai knows, he encourages Link to visit town, as somebody in town likely knows more about the eighth heroine.[9]

Since Link is traveling into the Gerudo Highlands, Bozai will give him the Snow Boots. While wearing these boots, Link can walk even faster on the snow.[10] Despite seeming to help Link, Bozai thinks he is actually tricking Link. He believes that the eighth heroine legend is an unsolvable puzzle and while Link is spending all this time trying to figure it out, it might give him an opportunity to get closer to Link.[11]

After traveling into the Gerudo Highlands and finding the statue. Link can take a picture and return to Bozai. At this point Bozai will open up to Link, stating that the statue was just an urban legend and doesn't actually exist. He explains that he just made it up to keep Link engaged in hopes of forming a relationship.[12] Although when Link tells him it actually does exist, he thinks Link is just trying to make him feel better.[13] Bozai is surprised when Link actually shows him the picture, and tries to ask Link to spend some time with him before Link interrupts him.[14] Link asks for the Sand boots, which Bozai removes to give him.[15] Bozai will then ask for his Snow Boots back and will head over and sit beneath the tent in front of Gerudo Town. This will complete the side quest.[16]

After completing The Eighth Heroine quest, Bozai will sit down under the tent, just outside of Gerudo Town. Link can talk to him while wearing the Gerudo Clothes, at which point Bozai is upset that the two didn't get much time to spend together alone.[17] When Link tells Bozai he wants his snow boots, Bozai is a bit surprised, but also reluctant to give them, as then he'd have nothing to wear on his feet.[18][19] However, Bozai doesn't want to upset Link, so he agrees to give them to him if he can complete another task.[20]

The Eighth Heroine was missing its sword and Bozai wonders where it can be. All of the other Seven Heroines can be seen with their sword in hand, but the eighth one is missing hers.[21] Bozai will task Link in finding the sword, thinking it's likely somewhere in the steeps of the Gerudo Highlands. This time, he won't give him the snow boots as he needs something to wear.[22] Bozai is secretly hoping that without the snow boots there's no way Link will travel up to the Gerudo Highlands. He wants Link to fail and then come crawling back.[23]

The sword can be found at the south end of the Gerudo Summit. It's very cold, so Link will need some Cold Resistance armor to survive up there. Take a picture of the massive sword that's hard to miss and then return to Bozai. He is initially concerned, as he had heard from a traveler that Link went up into the Gerudo Highlands without any snow boots.[24] After Link shows Bozai the picture, he is completely shocked. He didn't think the sword actually existed and is wondering how Link could survive up there.[25] Bozai will reluctantly take off the Snow Boots and give them to Link.[26]

Bozai will now be there barefoot. It's at this point he finally pops the question to Link, asking him out on a date.[27] Link will respond with not a chance, which really hurts Bozai.[28] He will ask if he can just gaze at Link until he disappears from his vision.[29]