From Zelda Dungeon Wiki
Jump to navigation Jump to search
Want an adless experience? Log in or Create an account.
Boko Stick 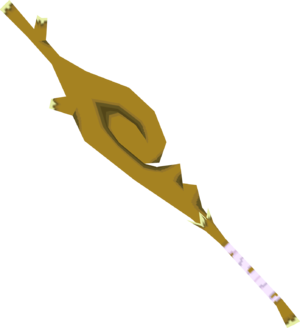 The Boko Stick is an enemy weapon in The Wind Waker. These sticks are sometimes found visibly within Jars, particularly in the Forsaken Fortress and Dragon Roost Cavern. Additionally, several Bokoblins can be seen carrying these sticks and they will use them to attack Link.

The sticks themselves are the hardened stems of Boko Babas, very similar to that of Deku Sticks from Deku Babas. Link can acquire a Boko Stick after defeating a Boko Baba. These sticks, however, are more durable than Deku Sticks as they will not burn if left lit for a long time and they cannot break.

Link can light a Boko Stick on fire by walking towards a lit torch. Link can then use a lit Boko Stick to light other torches in the room to solve puzzles. Link is unable to carry the Boko Stick between rooms and will automatically drop it when leaving.