From Zelda Dungeon Wiki
Jump to navigation Jump to search
Want an adless experience? Log in or Create an account.
Cara 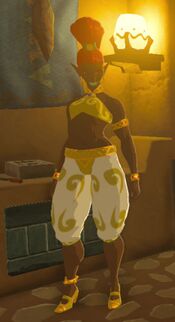 Cara is a character from Breath of the Wild.

Cara works at Starlight Memories, the Jewelry Shop that is found in Gerudo Town. Early in the game the shop is closed and Cara is a bit concerned with all the problems that have been facing the town.[1][2] In particular, she's a bit worried about the Divine Beast Vah Naboris that is causing some trouble, as well as the theft of the Thunder Helm.[3]

After Link completes the Tools of the Trade quest, the Starlight Memories shop will open up. Link can then talk to Cara, who will call him a lifesaver for helping provide the Flint needed to reopen the store.[4][5] As a sign of thanks, she will tell Link several secrets about the shops owner, Isha.

She mentions that Isha was once caught in a tragic love triangle with Ashai, the women who runs the Voe and You relationship class in Gerudo Town. However, both women are now single, so it is clear how that ended.[6] Cara also has heard that Isha sleeps wearing nothing accept for accessories.[7] Cara also explains that Isha's actual name is Jewel, but she was embarrassed to be a jeweler named Jewel, so she changed it to Isha.[8] Cara also tells Link that Isha claims she doesn't do anything special with her looks, but she does visit the Hotel Oasis once a week. She mentions that it's always good to remember that if someone says they don't do anything to maintain their looks, it's probably not true.[9]