From Zelda Dungeon Wiki
Jump to navigation Jump to search
Want an adless experience? Log in or Create an account.
Moblin Bust 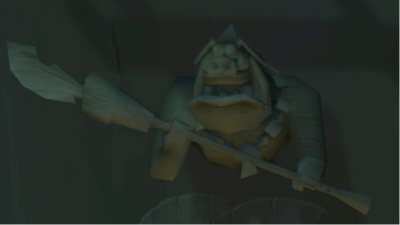 Moblin Busts are Moblin-shaped statues that serve as traps in The Wind Waker. These statues can be found in the Forsaken Fortress and the Savage Labyrinth. They are made of stone and feature the head, shoulders, and chest of the Moblins. While the Moblin Busts hold a spear in both hands, they do not attack with them.

When Link first visits the Forsaken Fortress, he can find a Moblin Bust attached to the wall over the large door. Another Moblin Bust appears at the fortress when Link visits a second time. It can be found attached to a wall on the outside of the fortress. After Link has confronted Ganondorf, this statue will disappear. Unlike this bust, the Moblin Bust in the Forsaken Fortress can still be found after Link has confronted Ganondorf.

When Link enters the Moblin Bust’s zone, it sniffs its nose like normal Moblins and looks down at him, charging up its eyes to shoot lasers at him if he remains in the bust's zone for too long. For the Moblin Bust in the Forsaken Fortress, every time Link touches the carpet, the statue is activated. In order for Link to avoid its lasers if activated, he should either get under the bust or the beds in the room or he can go to the outskirts of the room. Using his shield, Link can also block the lasers from him which pushes him across the room slowly, being possible out the bust’s zone

In the Savage Labyrinth, six Moblin Busts appear attached to the walls on the 49th floor. Here, they can be found alongside four Mighty Darknuts. Instead of the ones in the Forsaken Fortress, these statues blow fire out of their mouth and not lasers. Once Link is near them, the Moblin Busts will sniff its nose and blow fire immediately, lasting for about three seconds before stopping. In order to avoid it, Link can run away from the fire or he can get under the bust. He cannot use his shield to block the flames, however. Similarly to the busts in the Forsaken Fortress, the Mighty Darknuts do not trigger the Moblin Busts or get hurt from the flames.