Manny (Breath of the Wild)

From Zelda Dungeon Wiki
Jump to navigation Jump to search
Want an adless experience? Log in or Create an account.
Manny 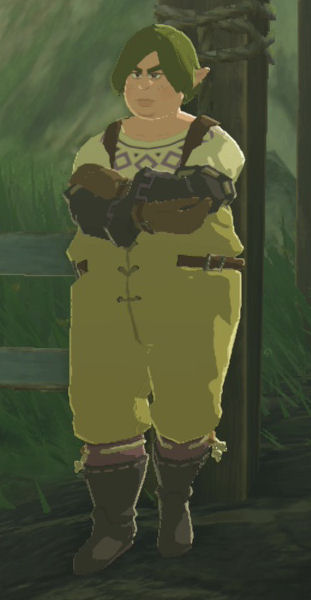 Manny is a character in Breath of the Wild.

Manny is a resident of Hateno Village, where he lives in the house directly across from the Kochi Dye Shop. Each morning at 5am, Manny will walk over to The Great Ton Pu Inn, where he stands outside, just checking out people that are walking by.[1][2] He does seem a bit agitated if Link is not staying at the Ton Pu Inn.[3]

Manny is a bit of romantic, but is shy about it. While he's checking out visitors and strangers that come into town, he always has his eyes on any beauties that wander into town.[4] In particular though, Manny has a crush on Prima from the Ton Pu Inn, but he doesn't even know if Prima knows who he is.

Manny does have some knowledge about the outside world and is aware of Princess Zelda. He states that even Zelda could give Prima a run for beauty.[5] Manny knows of the story of how Zelda got swallowed up by the Great Calamity 100 years ago and that the peace that is over Hateno Village is completely owed to her.[6][7]

Each evening at 9pm, Manny will return home. Despite this, he never actually goes inside. He simply stands outside of his front door, looking out at people that wander by. Manny stays awake 24-hours a day and will never sleep in his bed.[8]

A Gift for My Beloved

Main article: A Gift for My Beloved

When talking to Manny, he will profess that he has a romantic interest in Prima, but he seems a bit nervous about making the introduction. He wants to get a special gift for Prima, but has no idea what that gift should be.[9]

When talking to Prima and asking what she likes, she seems thrown off by the question. She makes up the fact that she likes Restless Crickets and wants to have a collection of 100 crickets.[10]

After collecting 10 crickets, Link can return to Manny and show them to him.[13] As a reward for helping him out, Manny will give Link a Silver Rupee.[14][15]