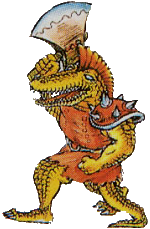 Daira are powerful humanoid alligators that appeared in The Adventure of Link and A Link to the Past.

Dairas are enemies that wield powerful axes that can easily slice through Link's shield[1][2][3]. They can be found in Western Hyrule. Dairas come in two variations in this game; orange and red.

Red Dairas are more powerful than Orange Dairas. They can throw their axes at Link and it causes twice as much damage as the Daira itself. Link's shield cannot block their axe throws, and he can only block it with the Reflect Spell. Downward Thrusts are recommended against these enemies. Red Dairas probably the most powerful overworld enemy in all of Western Hyrule. So, fight it with caution.

In this game, Dairas are wearing an armor with cape, but not wield any weapons at all. They are one of the most common enemies that appear in Gargoyle's Domain, a Dark World dungeon. They also appear in the last dungeon of the game, Ganon's Tower and the bonus dungeon, Palace of the Four Sword. Their official English name was never released. But, their Japanese name is "Zazakku"; the same as the Japanese name for Dairas in The Adventure of Link. They come in two variations in this game; blue and red.

Blue Dairas simply move around at random, damaging Link if he touches one. They have a great defense that allows them to withstand a few blows even from the Master Sword.

Red Dairas are more dangerous than the blue variety, and they also able to spit fireballs at Link. Link can only block these fireballs with the Mirror Shield he obtains late in the game. Red Dairas also have twice more defense than the blue ones.