From Zelda Dungeon Wiki
(Redirected from Gargoyle's Domain)
Jump to navigation Jump to search
Want an adless experience? Log in or Create an account.
Thieves' Town 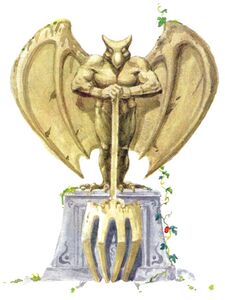 Artwork of the Entrance to the Dungeon

Thieves' Town, also known as Gargoyle's Domain, is the Dark World dungeon that holds the Fourth Crystal and is the 8th dungeon in A Link to the Past. The entrance is located in the Village of Outcasts, where the Weather Vane is in the Light World's Kakariko Village .

"The dark dungeon home of Blind the Thief was under the Village of Outcasts. Blind was afraid of bright light and he never left the confines of the dungeon, letting his band of thieves do his dirty work. This three-floor hideout was known as the Gargoyle's Domain because at the entrance to the underground was a Gargoyle monument which loomed over the citizens of the village. It took a strong person to open up the dungeon's entrance and those who did enter could become even stronger by discovering the Titan's Mitt."

"By tossing Bombs onto weak spots in the top floor, explorers could light the lower passages."

"The Village Underground"
"The village dungeon contained four large chambers, with several connecting passages, along with a few smaller rooms and an upper and lower floor. The lower floor is where Blind kept his prisoners."

"A Curious Creation"
"The huge statue guarding the entrance to the village dungeon scared away many villagers and village visitors. Those who were not frightened by the Gargoyle could open the dungeon's entrance with an act of incredible strength."

"Hidden Hallways"
"The four large chambers near the entrance to the dungeon were connected by many passages. Some were hidden by the walkways which lined the upper half of the chambers."

Blind the Thief is originally disguised as a maiden which Link rescues from a cell in the dungeon. Upon being rescued he will ask Link to take him outside, then he will follow Link around for the remainder of the dungeon. When Link takes Blind into the boss room and exposes him to light, his true form comes out and the boss battle begins.

Blind will hover around either the top of the screen or the bottom of the screen, alternating, and shoot laser beams at Link. His head is the weak point and can be damaged with the sword. After a few sword hits, his head will split from his body and float around the room shooting beams at Link. A new head will grow from Blind's body and the battle will continue as normal, except with the original head flying around the room shooting beams. After taking more damage, the second head will split like the first one, and a third head will appear on Blind's body. After a few more sword strikes, Blind will be defeated.

"The Mighty Mitt
The Titan's Mitt from the thieves' dungeon allowed Link to lift large stones and huge steel blocks. With it, he was able to move heavy stones that had blocked access to some areas. In effect, the mitt opened whole new regions for exploration."

A Link to the Past Dungeons[edit][hide][show]
Retrieved from "https://www.zeldadungeon.net/wiki/index.php?title=Thieves%27_Town_(Dungeon)&oldid=399770"
Categories: