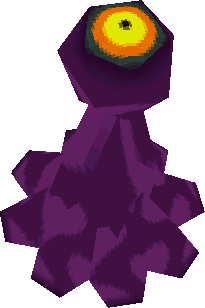 Bellum Slime Minions appear during the various battles with Bellum. While fighting Bellum at the Temple of the Ocean King, he will shoot out some slime that lands on the ground. This slime then takes the form of a slime minion and it will ever so slowly make its way over to Link. The Slime can be defeated with a simple slash from your Phantom Sword. The minions will occasionally drop Recovery Hearts and Arrows. Bellum will frequently get some of its minions to appear on the staircases that leads up to the various levels of the boss room.

When Bellum takes control of the Ghost Ship, a number of eye targets will appear that closely resemble Bellum's Slim Minions. These guys will occasionally shoot green ooze towards Link. These can be taken out with a shot from the Cannon. Link will need to defeat all of the Slime Minions that appear around the boat to defeat Bellum.