From Zelda Dungeon Wiki
Jump to navigation Jump to search
Want an adless experience? Log in or Create an account.
The Legend of Zelda: Majora's Mask Orchestrations 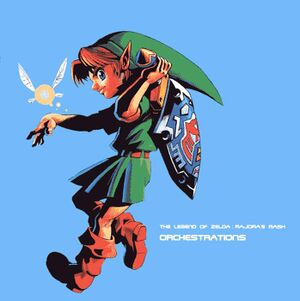 The Legend of Zelda: Majora's Mask Orchestrations is a soundtrack for Majora's Mask that features some of the tracks from the game being performed in orchestral form using synthesizers. It was released on October 21, 2000 in Japan and was composed by Koji Kondo. The arrangements and performances were done by Shoji Horikoshi, Masahide Yumi, Masaharu Toyoda, Keita Kikuchi, and Katsuya Takahashi.