From Zelda Dungeon Wiki
Jump to navigation Jump to search
Want an adless experience? Log in or Create an account.
Boom Bam Golf 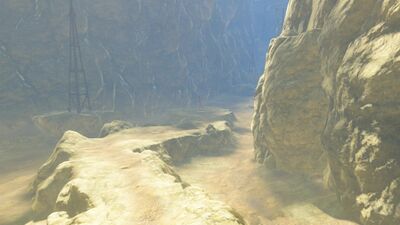 Boom Bam Golf is a mini-game located at the Tanagar Canyon Course in Breath of the Wild.

The game is located directly beneath the Tabantha Great Bridge, where Link will find a Goron named Modar. For 20 Rupees, Link can play the game.[1] The game works like a single hole of golf. The goal is to try and get the ball in the hole by the flag pole in as few hits as possible.[2]

Link will need to use Stasis to freeze the ball, before then hitting it with weapons. Two-handed weapons - such as the Iron Sledgehammers found right by the Goron - are the way to go, as they will launch the ball the furthest. Swords and other one-handed weapons are better used for shorter distances.[3]

The course is pretty set and if at anytime the ball rolls off the course, Link will be penalized by one-stroke and the ball will be placed back at its previous location.[4]

To earn the top prize, Link will need to hit the ball into the hole in three shots.

It is not possible to hit a hole in one, or even to make it in within two shots, without cheating. However, there are methods that Link can use to make a shot in a single hit. In the past, each time the game started, the ball was placed in exactly the same location. Link could've placed an object on that spot before starting the game and this could cause the ball to appear on top of that object. However, it has since been patched and the ball will now spawn in a different location when an object is placed on its starting location.

(Patched) Most notably, it possible to use Magnesis and grab one of the mine carts all the way from inside of Hyrule Castle. Link can make the very long trip all the way the Tanagar Canyon, with the Minecart in hand. Then he can place the minecart right where the ball spawns. If done correctly, the ball will spawn inside the minecart. Link can then use Magnesis to carry the ball to the hole, without ever hitting it. Then, after getting it into the hole, tapping it once with a basic weapon will cause a hole in one.

When doing this method, if the ball falls off, or is not aligned properly. Link can grab the cart with Magnesis and just walk away from the game. This way the cart will not disappear and Link can try again.