From Zelda Dungeon Wiki
Jump to navigation Jump to search
Want an adless experience? Log in or Create an account.
Arwing 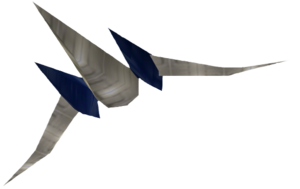 The Arwing is an unused enemy found within Ocarina of Time. The enemy is based around the spacecraft used by Fox McCloud in the Star Fox series. The arwing only appears in Ocarina of Time when using the proper GameShark code or with Arbitrary Code Execution.

Early on, it was believed that the Arwing was only included in the game as an Easter Egg for fans to find within the game. However, in June 2011 it was revealed that the movement patterns of the Arwing were identical to that of the Fire Temple boss, Volvagia. Developers of Ocarina of Time put the Arwing into the game and developed Volvagia around it.