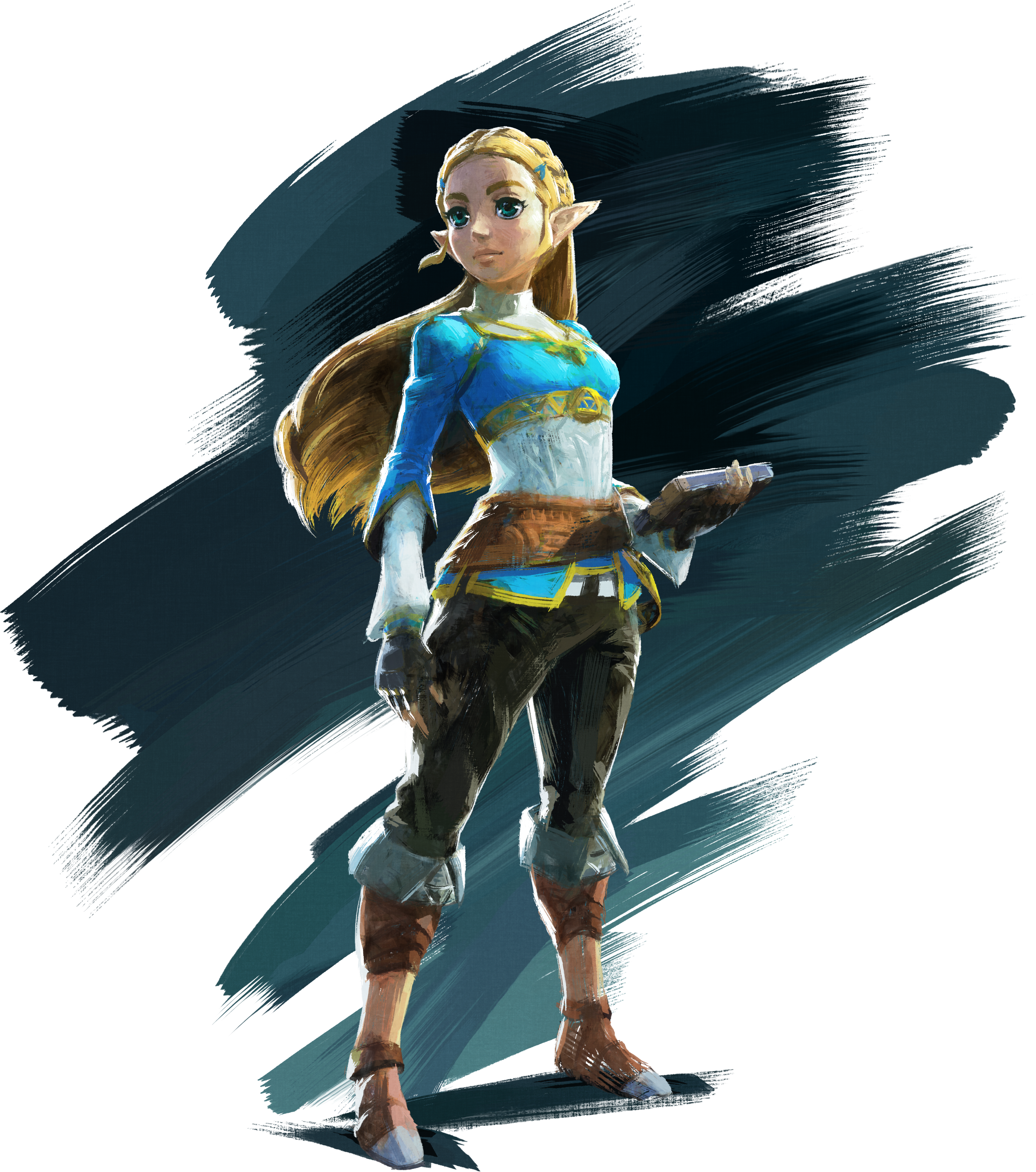 I have updated my picture. Recently got BoTW and... Omg. All I can say.

no seriously. I am.

Hi, I'm Zeldazeldazelda! I'm a girl who joined Zelda Dungeon Wiki because it is my favorite website and I know a lot of information about the Zelda world that I would like to share. (And I don't understand my username)

My favorite Zelda game is Ocarina of Time, which I beat. I am currently on Master Quest (Dun dun duuuuuuuun!). The first Zelda game I ever played was Ocarina of Time, however, I have seen other people play The Legend of Zelda and Adventure of Link. (My dad.) Anywho, I beat two Divine Beasts in Breath of the Wild and in Twilight Princess... well, my Wii broke years ago. So, :-(

I own 6 Zelda games. The below are my game stats...

Tri Force Heroes: Sky Temple (except for I skipped a million levels. So it doesn't count.)

Breath of the Wild: Thunderblight Ganon in Vah Naboris. Grrr.

When I was little, I would watch my daddy play Adventure of Link. This was way before Tri Force Heroes, Skyward Sword, etc... I actually considered it, like, amazing technology or something... Then there was that weird burnt XBox collection of original NES, Nintendo, etc. games... Where I first discovered OoT... Of course, I also have different systems on which I play my games. I would kill for Ocarina of Time for the XBox... I had it once. Two words: Glitched. Version. ~Shudder~. Seeing a LITERALLY completely pixelized Kokiri Shop was creepy... Also an upside-down Deku Tree... Anyways. System Stats. Below.

Know what else I would kill for? Majora's Mask for the Wii. Do they even make that? Ooh, and Tri Force Heroes for the Wii! (And I am positive they don't make that.) My only downfall? My TV is big.... Seeing the Happy Mask Salesman totally FREAK out on a 70-inch.... ~Shudder~. I don't want to think about that.

Views on Zelda, Zelda Games, etc. No one probably cares tho

So, I've only played six games but, being a girl, I still have a heckuva lot of opinions. On. Everything. Shall I break stuff down?

98%, A+ in my book Ocarina was wonderful. After playing an odd and strange and creepy burnt ROM of Ocarina, then losing the disc... Well, I could never forget that game. The game I played at five and could never get past that... strange... tree. So after... I think four years I said, "Mommy! Take me to GameStop." I had contemplated sources (My 6' 2" uncle, Kipling), asked questions (naggingly, to my other, shorter uncle Scott). Then, with... 0 dollars in hand, we ventured to GameStop.

When I got home, I gave my "mommy" the... erm... $8 that I had and played. Pleased to see it was the game from my childhood, I giddily picked up a sword and shield and (tried to) beat the Deku Tree without a walkthrough!

Yeah, no I didn't. I used the trusty Zelda Dungeon (woot woot!).

After years (months) of trying, I defeated Barinade. I texted my brother, who had been trying to defeat it too, for months. He responded "lol". Humph.

After that, I was fine.

Until... the Forest Temple.

When you stop playing and come back a year later, you forget where you are. Panicked, you look up walkthrough after walkthrough until you find where you are and (100% true) defeat Phantom Ganon with HALF A HEART LEFT.

After that I was fine.

Yada yada yada, found where I was after foreeeeeeeeeeeevzzz, and defeated Morpha in 2 seconds. (Morpha??? MIPHA??? do you agree... wait agree with what).

I was fine then. Defeated the remaining two temples without a walkthrough (mostly)... and every. Single. Boss. Was soooooooo easy. (Especially Ganondorf!)

But so addicting! I found the not-just-dark-in-color game when Googling Ocarina of Time. A sequel? I asked myself. Then I turned to my mom. "Mom, can I get this?"

Flash forward to my brother's birthday. Our grandmother takes us to Wal*Mart (see? I put the... *...) so he can pick out a present. I beg him. "Get Majora's Mask? Get Majora's Mask? Pleeeeeeeez" He agrees, he plays first, gets bored. I did not feel remorse/regret for my manipulation; he still plays it now and then. So, all good.

Anyway, the game is quite good. I cannot figure out how to defeat the Garo Master. Okay, I lied: I know how, I - JUST - CAN'T. * edit - beat him AND Stone Tower Temple! * But the game itself sets a tone: Even in a bright cheery grassland, you are reminded of imminent doom by pointing the camera at the sky; thus even indoors there's a sense of destruction, death, and darkness.

It still manages to acheive a sense of childlike, innocent gameplay. Perhaps the... moon... sets a dark twist that helps, well, me, as a tween, to better explore the "dark side" of gameplay - while never entering it. It sounds... almost... scary that such a game exists: to be happy, with a twist of darkness. But it's not. See, peepz:

It's The Legend of Zelda: Majora's Mask.

which I just had to include next because I have such strong feelings about it. I received it for Easter and was so excited at first; after playing it for a while I realized three things. (?%, C- in my book)

So little dimension leads to...

When I say 'little dimension', I mean: no point. It's boring.

For a game with so little dimension...

For a game with so little dimension, it is hard AS CRAP.

Reliabilty should be questioned...=

Tri Force Hero's reliability on SpotPass, StreetPass, and overall complete Internet/friend interaction/connection is just too much. Elements of this are masked with in-game elements("connect with friends and get friendly tokens!!!... you can use them to make clothes..."), but they make the game virtually impossible to beat without Internet and friend interaction. For example, you need friendly tokens to make some outfits. If you want all the outfits and don't have friendly tokens,

Pretty good. Bubbly and bright, the cute and vibrant storyline is made further realistic with bright 3D character models and happy cheeriness. The music, the atmosphere of Skyloft -

Is found only on Skyloft, friend.

Journey down to the "Surface" - or visit Skyloft at night - and you meet SUPER challenging bosses, rabid cats, and overall... darkness. Similar to Majora's Mask, the dark tone and cuteness clash to create a weird... tone. But this is different, along with Adultish Link there's a sense of leaving childish innocence to see what the world is really like. 90%, A in my book.

Nothing to hate. 100% A+ in my book. LOVE it. Nothing bad. Everything... The music... the darkness... the stupid companion imps who speak gibberish... dying of sadness because my Wii broke. Oh... i LOVE IT LOVE IT LOOOOOOOOOOOOOOOOOOOOOOOOOOOOOOOOOOOOVE IT... I feel like, contrary to other things I've written about childish innocence and darkness combining, this game is full-on dark and terrifying. Plus, the graphics are beautiful. Just... A+, folks. A. Flippin'. Plus.

This will be long, aka BotW

Yup, you heard that right. In other words, NOT an A+. But:

With so many many many sidequests and shrines and hidden things to do:

I can't count how many shrines I did and did NOT unlock. Furthermore, beat! Where does Kilton appear in each town? So many flippin' conversations to eavesdrop on. TARREY TOWN ANYONE????? ugh, a.i.r.? (am I right? yeah... no one else makes up weird acronyms)

Trying to complete the Hyrule Compendium.

Overall a beautifully realistic game, just overwhelming. I do love cooking though (in real life AND in-game). With a game made this realistic, however, you can't help but wonder: where are the limits? And, why so many limits? It makes you hungry for a game where you can do not just the advertised 'anything', but absolutely anything. Be able to climb on anything. Gather any ingredient that exists in real life, cook with more than five ingredients, make modern-day dishes, like... erm... p - i - z - z - a.

I do adore these graphics, more realistic and whimsical at the same exact time than anything. But I do hate the lack of a green tunic, pointy green hat, and brown-and-white horse. One more thing: a lot of things rely on amiibo. Not vital things, but... Outfits, items, certain brown-and-white horses...

I've found it hard to accurately convey my exact feelings on paper (or computer screen), but other chatterboxes out there should relate!

I'm weird so I wrote a book: Tips from Zelda on Decorating. JUST leave me alone.

Tips from Zelda on Baking and Cooking.

I wrote a detailed and rich intro but I'm too lazy to copy it; in a nutshell: I wanted to flesh out Zelda's character. K? Good.

Mario. Harry Potter. Lalaloopsy. Jurassic World. 'Elmo's Musical Monsterpiece'. You name it. And NO, I do NOT play that Elmo game. The below is (not) a complete list of my video game collection.

Harry Potter (LEGO Years 1-4, and the Half Blood Prince)

Sonic (Sonic and Knuckles, Sonic and SEGA all star racing)

For the Wii (most above) I have, like, infinite-ish.

Anju, a teenager living with her mom and Granny in the old Stock Pot Inn, has many challenges to face... Mom and Granny moving to Romani Ranch, her fiancee, Kafei, going missing, her friend Link dying while trying to save her from Twinmold, and that's to name a few! Read all about it in her diary!

Link is a young hero traveling and having adventures... Well, he used to be. Now he's made a rest stop at Clock Town and sleeps in Stock Pot Inn. With a mysterious boy wandering around town, the mayor's wife sobbing at midnight, Marillo and Judo acting suspicious, and a big secret unfolding right in front of Link, his feats as a hero begin again.

A book in the awesome trilogy... That was written out of order. The first book in the trilogy, though numbered Book Two, it is a story following the events of Link as he defeats the legendary beast King Dodongo... and comes one step closer to saving the world.

Another book in my amazing trilogy... That was written out of order. The second book in the trilogy, though numbered Book One, it is a still unfinished book following Link after he defeats the horrible Queen Gohma... And grieves over the Deku Tree's untimely death.

The actual third book in a trilogy written out of order, it is a unfinished and never started book following Link as he defeats the tough monster Barinade... And receives the Spirital Stone of Water from the sassy Princess Ruto. Currently, only the cover artwork for this book is done.

The ultimate walkthrough guide for one of the trickiest sidequests in the Zelda universe... Not to brag, but it was, if I do say so myself, awesomely illustrated by me. Currently unfinished, with only a couple more pages to go.

Pages I have Created

Check out some of the pages I have created!

My sandbox can be found here:

The Happy Mask Salesman. Why oh why did I sit on my bed in the dark with the door shut alone researching HMS fan theories????????!!!!!!!!!!!!!!!!!! His creepy near constant smile... Strangling Link... Red eyes... Children who live on the moon that look just like him... I have gathered information and my twisted mind came up with 2 theories:

Perhaps he was the elder of the 'ancient tribe' he talked about... Majora. The tribe created Majora's Mask to honor him, and it made him immortal, but he doesn't want to die. So when Skull Kid stole the mask, he was, like, I dunno, 'torn apart' or something.

The Whole Game is his Dream

Because the Moon Children look just like him, he of all people seems to have the power to control things from behind the scenes, and he has a WAY more important role in MM than OoT.