From Zelda Dungeon Wiki
Jump to navigation Jump to search
Want an adless experience? Log in or Create an account.
The Legend of Zelda: Link's Awakening (Manga) 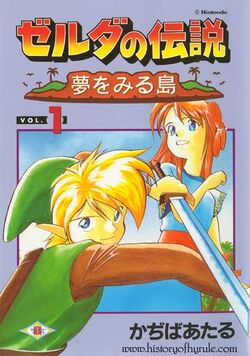 Cover for the first volume of the manga

This is a two-part manga for Link's Awakening that was released only in Japan. This manga was written and illustrated by Ataru Cagiva. The plot very closely follows the story of the game, other than a few slight differences. It is in black and white but still very nicely illustrated. This first volume of this manga was released in Japan on May 27, 1994, and the second volume was released on September 27, 1994. This manga also was serialized in GFantasy magazine.

Link's ship, while sailing away from Hyrule, is struck by lightning. He ends up as a castaway on the uncharted Koholint Island, where he meets new friends and foes and is faced with a huge dilemma if he ever wants to go back to his homeland. While on the island, Link helps its many inhabitants by recovering the Eight Instruments of the Sirens and waking the Wind Fish.