From Zelda Dungeon Wiki
Jump to navigation Jump to search
Want an adless experience? Log in or Create an account.
Karsh 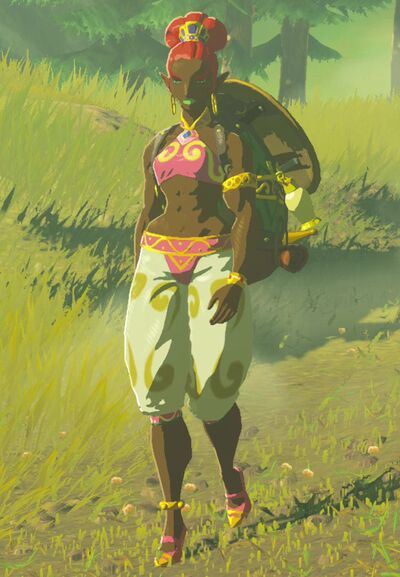 Karsh is a character from Breath of the Wild.

Karsh is a Gerudo traveler, who can be seen walking along the path, just south of the Foothill Stable, where she travels all the way to the Woodland Stable.[1] She can be seen wielding a Gerudo Scimitar and a Gerudo Shield, which she will take out upon an encounter with a monster. If Link defeats the enemies nearby for her, she will reward him with a meal or elixir.[2][3][4][5]

Karsh was once a master archer, as part of the Gerudo Town Guard.[6] However, since men are not allowed within Gerudo Town, she has left to try and find a husband out in the world.[7][8][9][10][11] Karsh seems to have some interest in the Gorons of the region. She comments about their toughness and their endurance, which are traits she seems to admire.[12][13] Karsh even seems to have a little bit of interest in Link.[14]

Karsh will comment about her surroundings. When she is closer to the Foothill Stable, heading towards Death Mountain, she'll talk about the heat that surrounds the area. It's so hot outsides, that she says that heat burns even more than at the Gerudo Desert.[15][16] She wishes that she brought some clothing that could withstand the burning heat. She wants to travel to the Goron Hot Springs, as she has heard that the place is great for your skin. However, the molten rocks that fall near Goron City, as well as the monsters that surround the area make it a very dangerous place to be.[17][18][19]

If at any point it begins to rain, Karsh will take cover at whatever location is nearby. She dislikes the rain, but thinks it's a good way to strike up a conversation.[20]