Gossip Stone: Are Cuccos Interesting, or Pointless Additions to the Series?

Posted on January 02 2015 by Alexis Anderson

“Don’t be such a Cucco!” You’d probably be offended to be accused of acting like a Cucco, wouldn’t you? But perhaps you shouldn’t be. Cucco are incredibly strong creatures that are loyal and protect their own from harm; these are endearing qualities, so why the negative connotation on the name? Well, aside from the Cucco being the Zelda form of a chicken, and the phrase “Don’t be such a chicken!” being an insult in reality, Cucco can be seen as unimportant to the series. What should be thought of these small creatures?

Cucco are mainly used in mini-games, or to help Link glide across open spaces. They can therefore be easily replaced by bomb or arrow mini-games, Roc’s Feather, or any teleportation instrument. If it weren’t for their cuteness and hilarious frenzied assaults on Link, I don’t think they’d necessarily need to be included in the games. Alas, they’ve cluck their way into the hearts of the players, so let’s further examine their merit.

Beginning with their appearance in A Link to the Past, Cucco have been a familiar feature of the Zelda universe. They can be found in Link’s Awakening, both Zelda titles on the N64, all three Zelda games for the Game Boy and Game Boy Color, Twilight Princess, and all DS and 3DS Zelda titles to date. They also grace the battlefield in Hyrule Warriors and Super Smash Bros. for Wii U and 3DS. 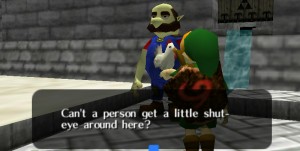 They help advance Link in the game a couple of ways. Sometimes completing the mini-games will earn you rupees, a bottle, a piece of heart, or even the bunny hood- which is always helpful. Other times using them to fly or glide helps Link reach a temple or otherwise unreachable area. And sometimes their crowing pushes the plot along, like when waking Talon in Ocarina of Time.

Despite these uses, my biggest concern is that these lovable characters don’t add any substance to the gaming experience. Are they just fun to mess around with, or chase, or torture through flight? As mentioned earlier, Cucco are interchangeable because their functions can be carried out by a multitude of other items if the developers decided to make it so. And they are in a way by pigs in The Wind Waker and Oocca in Twilight Princess. I usually don’t end up completing the Cucco mini games unless it’s absolutely imperative to move forward, but I do love flying around with them and being swarmed by the Cucco’s Revenge Squad. You can imagine my elation when in Twilight Princess I was able to possess a Cucco! So I feel that they’re a fun inclusion, but not overall necessary, and as long as uses continue to be tacked onto the little critters they won’t be entirely useless.

Other than being cute, there has to be a reason why our feathered friends have become so dear to us. One reason could be that they bring a sense of normalcy to the world of Zelda. They show up so often that they serve as a constant, so no matter how grave the situation becomes life can carry on as normal; they’re proof that Link’s constant efforts have a lasting affect- people come and go but the Cucco remain. They’re also a connection to our world, being that they are chickens. This helps the Zelda universe seem more realistic, and further immerse the player into it. 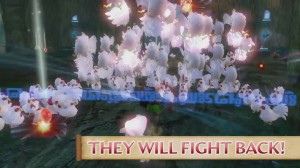 And finally, why do we love to hit them? Because they hit back! These seemingly helpless animals have a bite much bigger than their bark, and it’s representative of the human race. People have a clan mentality; we protect our own whether they be those of the same ethnicity, friend group, or social class. Alone we seem feeble, but only so much abuse can be observed before people group together to make a change. Push people to their limit and they’ll organize to take down the abusers. Cucco teach us not to mess with the meek, and once again connect with the real world to engage players.

It’s easy to find symbolism in any element of a game, if one just looks for it. But aside from the emotional ties to Cucco that players may feel, their intended purpose was basically to do the dirty work of the game. They’re mini-game-pieces or transportation, and altogether unimportant in terms of gameplay. But they are cute and memorable symbols of the series that I would never want Nintendo to do away with.

You may feel differently about the Cucco. Do you think they’re important additions to the series? Do you agree with the sentiments expressed here? If there were anything you could change to make the Cucco more useful, what would it be? Let your opinions loose in the comments!