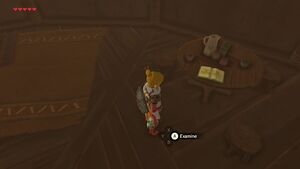 On the desk at the Highland Stable

Super Rumor Mill V3 is a Book from Breath of the Wild and one of the Super Rumor Mills found throughout Hyrule. It can be found on the desk at the Highland Stable. It is part of a series of super rumors left by Traysi, guiding Link on miscellaneous adventures.

I've loved rumors since before I was born. In fact, I was the first to report on my rumored birthday! Traysi here! This time I've got a juicy bite of gossip I've been dying to share! Ancient horse gear is real, and it's FABULOUS! Apparently, there's some incredible horse gear from Hyrule's distant past. I'm talking the long, long ago, folks! A bridle that increases your horse's skill and a saddle that can instantly summon your horse to your side. The bridle is south of Hyrule Ridge, beneath a cherry blossom tree at a mountain where creatures gather. The saddle is at a mysterious spring where a horse spirit resides. At least, that's what the rumors say. Sound like the ancients liked to horse around. I NEED that gear! Traysi's Recommendation: *****