Rupeeland is a place featured in Tingle's Rosy Rupeeland for the Nintendo DS. Tingle can get entry to this land, if he collects enough rupees,and throws them into a pool of water.

After meeting with the Grand Fairy, Tingle realises that Rupeeland is a horrible place, and he would serve as Uncle Rupee's slave. After this he has hallucinations about other Tingles, and a game called Bad Uncle Rupee's Ashen Rupeeland. 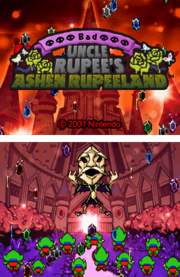