From Zelda Dungeon Wiki
Jump to navigation Jump to search
Want an adless experience? Log in or Create an account.
Uncle Rupee 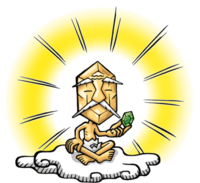 Uncle Rupee is a character in the spin-off game Tingle's Rosy Rupeeland. Uncle Rupee is the creator of the state-of-being known as the Tingle, and he also serves as the game's final boss.

In Tingle’s Rosy Rupeeland, Uncle Rupee offers the 35-year-old main character, currently just an ordinary man, entrance to the paradise known as Rupeeland, on the condition that he collects a large quantity of Rupees for him and toss them into the pool that is west of the man's house to construct a tower that will reach into the heavens.

The man accepts, and Uncle Rupee transforms him into a Tingle, giving the man the infamous green and red outfit and his desire for Rupees. Tingle later discovers Uncle Rupee is a demon who gains his powers from Rupees. When he is weak, he is unable to get Rupees himself, and enslaves people, transforming them into Tingles, to get the Rupees for him.

After Tingle collects the Master Rupee and takes it the Western Pool, Uncle Rupee demands that he hand over all of his Rupees. When Tingle refuses, Uncle Rupee fights back. After Uncle Rupee is damaged enough by the Rupees that Tingle throws at him, he is killed, and the man is freed from the Tingle curse.