Wii U launched at the end of last year, so I'd like to be able to talk soon about the new Zelda game we are preparing for you on Wii U, but since I have to wait until you can see actual game visuals to talk about it in detail, I will instead talk about the driving theme behind our development.

Our mission in developing this new Zelda game for Wii U is quite plainly to re-think the conventions of Zelda. I'm referring to things like the expectation that the player is supposed to complete dungeons in a certain order, or that you're supposed to play by yourself... The things that we've come to take for granted recently. We want to set aside these "conventions", get back to basics and create a newborn Zelda game so that the players today can best enjoy the real essence of the franchise.

We had actually worked on this kind of challenge with Skyward Sword, but we weren't able to put effort into changing the linear-path structure of the game. I hope to be able to talk to you in more detail about how it will change after I see it come together a bit more. 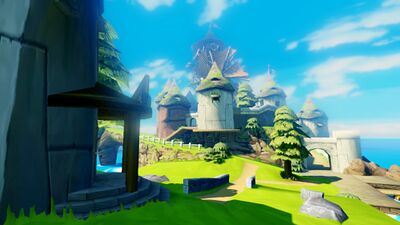 Separately from that, there are some interesting images that have emerged from the development process for this new Wii U game that I'd like to show you. If you're a Zelda series fan, you may know what this image is. This is an image showing Windfall Island from The Wind Waker, which was released 10 years ago on Nintendo GameCube. And it is now in HD on Wii U.

After the Zelda team showed the Wii U Zelda demo that we called the Zelda HD Experience at E3 2011, we continued to experiment with converting past Zelda art styles into HD as we continued to consider graphical styles for the new game. With The Wind Waker, we felt it wasn't just a simple change to higher resolution graphics, but in fact felt as if it had been transformed into something entirely new.

The reason I wanted to show you these pictures today is because our new Zelda title looks like it is going to take some time to complete, so I wanted to report that while you're waiting for that game to release, we intend to offer you The Legend of Zelda: The Wind Waker, reborn on Wii U, to play in the meantime.

I hope you will look forward to both The Wind Waker and our all-new Zelda title.