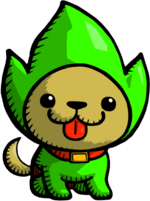 Barkle is a character featured in Freshly-Picked Tingle's Rosy Rupeeland for the Nintendo DS. Barkle is Tingle's dog. Tingle meets Barkle very early on in the game. Tingle and Barkle wear the same outfits.

Barkle is Tingle's pet dog that is fond of bones.[1]

Barkle's Sticker is one of 700 stickers than can be collected in Super Smash Bros. Brawl, while playing though the Subspace Emissary. Barkle's Sticker increasing Tail Attacks by 32. It can be used by Yoshi, Pikachu, Diddy Kong and Pokémon Trainer.