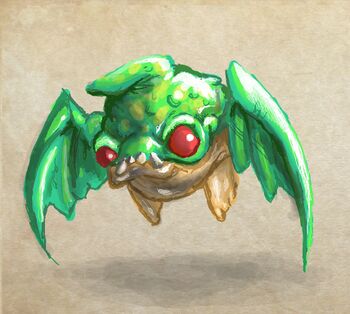 Zirro[1] is an enemy that appears within A Link to the Past.

Blue Zirro are found around the Ice Lake within the Dark World. These winged mushrooms hover around in certain areas until Link draws near. When Link is around, the Blue Zirro flies in close proximity to Link, but still in somewhat of a random pattern. Blue Zirro have no means to attack Link other than simply flying into him. Fortunately, this doesn't do much damage at all as it takes away just one heart from Link.

Blue Zirro are more of an annoyance than actually a difficult enemy. If Link tries to swipe at a Blue Zirro, it immediately flies away from Link. This makes it rather difficult to defeat these enemies from up close, but it also makes it easy to repel them away from Link. Link can defeat these enemies with two strikes from the Master Sword. Link can also use projectile items such as the Bow and Arrow, in which it also takes two hits to defeat.

Green Zirro are significantly more dangerous than their Blue counterparts. This variation has the ability to shoot seed bombs from its mouth. These bombs drop to the ground and create a small explosion. If Link is hit by these seed bombs, it does two full hearts of damage. Furthermore, the Green Zirro uses this attack in rapid succession, so it can be quite difficult to avoid.

Despite its more powerful attack method, the Green Zirro is actually weaker than its Blue Zirro counterpart. It takes just one hit from Link's Master Sword to defeat. Despite its weaker health though, its added attack makes it the much more dangerous variation.

A Link to the Past Enemies[edit][hide][show]
Retrieved from "https://www.zeldadungeon.net/wiki/index.php?title=Zirro&oldid=136586"
Category:
Hidden categories: