This article is about the giant island-like turtle from Majora's Mask. For other turtles, see Turtle (Disambiguation). 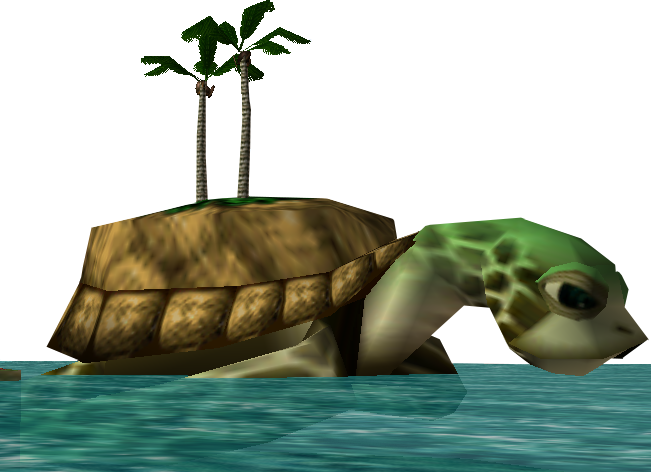 The Turtle is a character that appears in Majora's Mask. 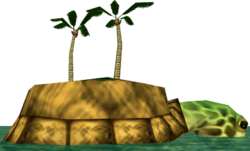 Once Link has retrieved the Zora Eggs and learned the New Wave Bossa Nova; he must go, as Zora Link, to Zora Cape. Playing the song where Lulu stands silent vigil outside Zora Hall will restore her voice, and reveal that the small island nearby is a giant turtle.

On awakening, the gargantuan terrapin rises from the water and immediately confuses both Lulu[1] and Link by knowing their names, and what had happened while he slept. He calls for Link to hookshot to the palm trees on his back[2], and come with him to Great Bay Temple.

After Link clears the temple, the turtle will thank him for his effort, and tell Link that he must resume his slumber... but that he would like to listen to Lulu sing a bit longer, first. He also comments that he can only do so much to reverse the coming doom of Termina, due to the bidding of the gods.[3]

The Turtle appears periodically as a platform on the Great Bay stage. 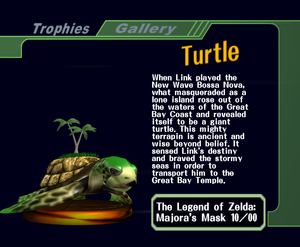 He also has a trophy to collect in the game, the text of which reads:

TURTLE
When Link played the New Wave Bossa Nova, what masqueraded as a lone island rose out of the waters of the Great Bay Coast and revealed itself to be a giant turtle. This mighty terrapin is ancient and wise beyond belief. It sensed Link's destiny and braved the stormy seas in order to transport him to the Great Bay Temple.
The Legend of Zelda: Majora's Mask | 10/00