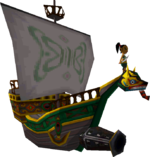 Jolene's Ship appears in Phantom Hourglass. After completing the Temple of Courage, Jolene's ship starts to appear throughout the sea. It possesses a torpedo launcher and it will launch torpedoes out towards the ship. These can defeated, but a well timed jump can avoid the torpedo. If the torpedo hits Link's ship, the ship will stop in its place for a moment and Jolene will sail towards you. After Jolene's Ship gets close enough to Link, Jolene boards the S.S. Linebeck and engages in what she calls a "pirate fencing match".

Jolene is not after Link, but Linebeck who stole something from her. Whenever she boards the ship Linebeck hides in a box waiting for Link to do away with her.