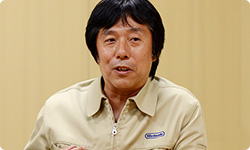 Tôru Ôsawa is a game designer who has worked for Nintendo since the late 80's. Ôsawa has been involved with numerous Nintendo titles, including multiple games in the Metroid and Super Smash Bros. franchises. He has worked as a designer, director, producer, and supervisor. His lone work on the Zelda franchise came in 1998 where he served as the game’s Script Director. While he was credited as the script director, he was the eldest of the five directors that worked on the game, and thus, took on more of a leadership role with the other directors.

Ôsawa had been working for Nintendo since the late 80's, but had not had the opportunity to work on a Zelda title until Ocarina of Time. He had a desire to work on the Zelda series and When the opportunity presented itself, he accepted it right away. Ôsawa began to write the story of Ocarina of Time with the idea of sword-fighting in mind. The early concepts of Ocarina of Time had Link in a first person mode, but those ideas were scrapped. Eventually after a trip to the Toei Kyoto Studio Park, a theme park in Japan, Osawa witnessed a ninja show, which led to the idea of Z-targeting.