From Zelda Dungeon Wiki
Jump to navigation Jump to search
Want an adless experience? Log in or Create an account.
Ocean Octorok 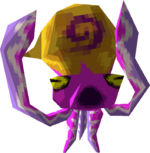 Ocean Octoroks are water-based variations of the Octorok and first appear in Phantom Hourglass.

These water-based octoroks can be annoying at times, especially when encountered in the fog. They stay close to the water and dive under repeatedly, shooting rocks when they reemerge. A single well-aimed cannon strike will defeat them.

Ocean Octoroks will appear underwater and will shoot ink at the Spirit Train making it much slower. The ink will also make the map disappear for a short period of time. Rub the screen to remove both of the effects. Otherwise, they are not much trouble, besides the amount of hits they take to defeat. They commonly drop 20 rupees when defeated.