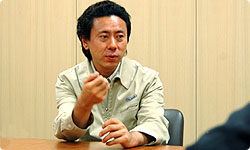 Masafumi Kawamura is a sound programmer who has worked for Nintendo since the late 1990's. He first worked on titles in thePokemon Stadium franchise before joining the Zelda team with The Wind Waker, where he is credited with Sound Effect Programming. He would go on to work on a number of titles in the Zelda series, as well as other prominent Nintendo titles, including Donkey Kong Jungle Beat, Super Mario Galaxy, and Wii Sports Resort.