From Zelda Dungeon Wiki
Jump to navigation Jump to search
Want an adless experience? Log in or Create an account.
Koyin 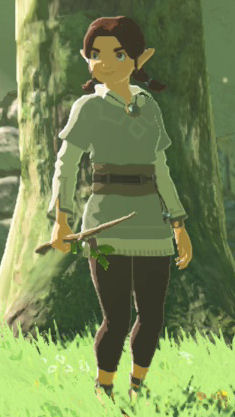 Koyin is a character in Breath of the Wild

Koyin lives on the farm, located at the northeast edge of Hateno Village on the road towards the Hateno Ancient Tech Lab.

Koyin is a fighter and will not shy away from a battle. She hates that monsters that have come up to her farm from Hateno Beach.[1] The last time they attempted to come up, she used her Pitchfork to fight them off. While she wanted to follow them all the way to Hateno Beach, she wasn't quite sure she can take on all seven of them at once.[2] When asks, she will tell Link how to reach Hateno Beach, located just southeast of town and that Link can find it on his map.[3]

When Link first meets Koyin, she'll be a bit angry, as she's on the lookout for monsters. They come up to her farm from Hateno Beach and steal the sheep. She says that if somebody doesn't do something soon, she won't have any sheep left.[4] This will begin The Sheep Rustlers side quest.

After heading to Hateno Beach and defeating the seven enemies located at the Bokoblin camp, return and speak with Koyin. She will state that the sheep have all calmed down now that they monsters on the beach have been defeated.[5] She asks Link if he was the one who took care of those monsters. After finding out it was Link, she thanks him by rewarding him with ten bottles of Fresh Milk.[6]

Koyin is relieved that she can finally get a good night's sleep without worry about her animals.[7] She even states that the sheep have been yielding more milk and is very thankful for the work Link did.[8]